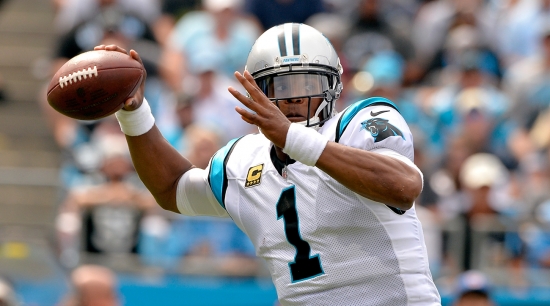 In terms of overall talent, Cam Newton arguably was at the top of this list before he ever threw a ball on the professional level.  Newton was the Heisman Trophy winner in 2010 at Auburn where he turned every head with his freakish physical abilities and as a rookie, he was the AP Rookie of the Year going to the Pro Bowl and throwing for over 4,000 yards and rushing for 706 and 14 Touchdowns.  This was typical of what he would do for the Panthers throughout his still going career as a true dual-threat Quarterback who is built like a Linebacker.  Newton has rushed for over 50 Touchdowns, which is more than many Pro Bowl level Running Backs.

Newton's best year was in 2015 where he was named the AP MVP and Bert Bell Award where he threw for 35 touchdowns and rushed for another 10.  He took the Panthers to Super Bowl 50, but he and the rest of the Carolina offense were stymied by Denver's defense.

From 2011 to 2018, Newton never had less than 3,100 Passing Yards, and a similar 2019 would have elevated him to the number one spot.  Unfortunately for the Quarterback, he was injured through most of the 2019 season, and the team and QB looked to separate from each other.  Newton was released and signed with the Patriots as a Free Agent.

With the Panthers, Newton threw for 29,041 Yards and 182 Touchdowns, while also rushing for 4,806 Yards while punching through to the end zone 58 Times.