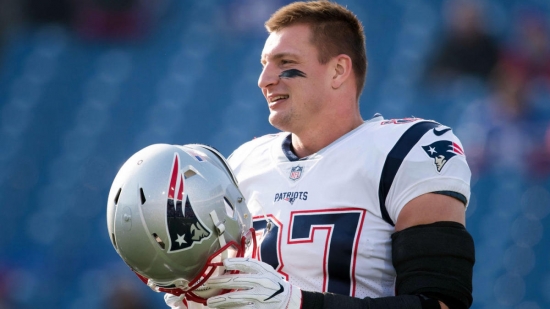 There are very few players who transcended the National Football League but longtime New England Patriot Tight End Rob Gronkowski did just that.  Gronk was in a myriad of commercials, television shows and even appeared at Wrestlemania and people who knew noting about football knew that they wanted to party with him.  Those who did know football knew that he was one of the greatest Tight Ends ever.

With a powerful build and dependable hands, Rob Gronkowski was the complete package at Tight End.  Drafted by the New England Patriots in 2010, Gronkowski was starting immediately and as a rookie turned heads when he had a three touchdown game against the Pittsburgh Steelers and had 10 TDs that year.  2011 was a more incredible year and stat wise the best of his career.  Gronkowski set personal bests with 1,327 Yards and 17 Touchdowns, the latter being the best ever by a Tight End.  Gronk was rewarded with a First Team All Pro and Pro Bowl Selections.

While he didn’t match those statistics again, he was still an absolute beast.  He had three more seasons where he went over 1,000 Yards, and he was a First Team All Pro in all of those years.  Gronkowski would be chosen for five Pro Bowls and he was a critical part of the Patriots success, including winning the division every year he was there while helping them win three Super Bowls.

Should Rob Gronkowski be in the Hall of Fame?