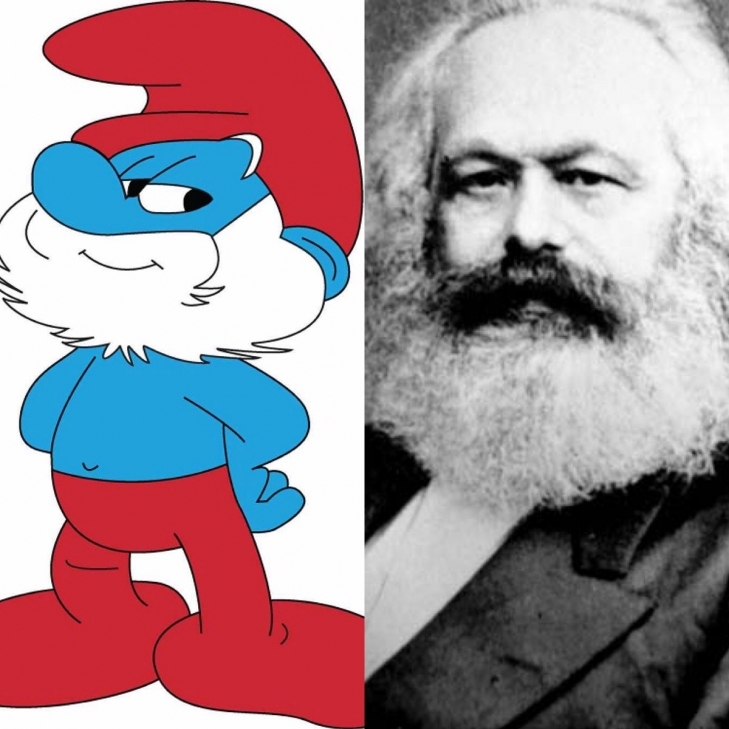 Welcome to a new feature on Notinhalloffame.com, where I, the Committee Chairman come up with random pop culture lists of drunken ramblings.

This is the kind of useless tripe that I excel at, though it did nothing to help me with high school English Class, nor did it impress any of the ladies, but as a middle-aged married guy, who still consumes alcoholic beverages that rivals anyone on Celebrity Rehab, I can say with full Joe Walsh meaning that “Life’s Been Good To Me So Far”.

After my M*A*S*H nonsense, I am going to switch over to the animated world and focus on the Smurfs.  Roughly twenty-five years ago (damn, I’m old) I came up with the realization that those blue creatures had red tendencies as they were clearly Communists.  I told that someone who I worked with, and he said, “Oh, you saw that online too?”

This was the internet’s early days, and I hadn’t saw that.   Since that time, I have seen others who came up with the same conclusion.  Basically, this was my long-winded caveat of saying that I apologize if I am not exactly breaking new ground, but in my defense, everything I am about to barf out now were my initial observations.

Without further ado, here are my ten drunken observations on how the Smurfs were commies.

1.All Smurfs lived in the same size mushroom house as everyone else. You have all seen mushrooms!  You may think I am under a mushroom-like influence right now, but I swear it is only hops and barley.  Mushrooms come in different sizes, but they had to find the one field where every one is the same size so nobody felt bitter about having a smaller house?  Some of those Smurfs deserved bigger houses.  Handy Smurf did all the work in designing those homes but he didn’t even create a basement in his own house, when surely, he could.  Every house had to be equal, regardless of what you contributed to the society, so a load like Lazy Smurf, who did absolutely nothing gets the same reward as a superstar like Handy.

Brainy Smurf had a lot of inventions, but many of his plans backfired leading one to question how smart he was in the first place.  Because, he was diagnosed as nearsighted early in life and had to wear glasses, he just adopted what was expected of him and he read a lot.  Jokey Smurf had only one joke; the exploding box.  He wasn’t funny at all!  But, he had the distinct laugh, so it was decided for him that he was the prankster of the bunch, which sucked for the rest of the Smurfs, because he couldn’t make any of them laugh! Clumsy Smurf’s job was only to be a clutz.  He might not be the most co-ordinated Smurf, but when you are told that all of your life it becomes a self-fulfilling prophecy.  If one of the other Smurfs helped him out and got him a hat that wasn’t one size too big, he might see better and not trip so much.  They can’t do that, because that is what Clumsy is supposed to be, and changing his role, changes the society.  Lazy Smurf got the best end of the deal.  They expected him to do shit and he gets an equal share of everything.

Maybe it was Grouchy Smurf, because he was allowed to be an asshole and nobody begrudged him for it.

Why is this important?

The father of Communism, Karl Marx was against the family unit and stated that it was the way that wealthy passed on their property, thus keeping the class system intact. Smurfs own no property and since they have no blood relation, they wouldn’t favor one over the other.  This is why the Smurfs value Smurfdom above all, just like Marx intended.

I will tell you what happened in the Smurf Village.  Papa Smurf figured out early from his somewhat effeminate voice that Vanity might be interested in the other Smurfs in ways that weren’t considered “Smurfy”.  I guarantee that you that what he did was hand him a mirror and convinced him that the only one he should love was himself.  This caused a chain reaction where Vanity expressed self-love, and subconsciously repressed his homosexual feelings.

Oh, and yes when I mean self-love, I guarantee that the mirror wasn’t the only thing he held tight with his left hand.

Not only that, he had a cat named Azreal.  Azreal? Isreal?  Coincidence?

This ends my second drunken list, and no worries as I have just restocked my fridge. Hopefully my third one isn’t one that is in twenty-five other corners of the world wide web.

Maybe the next one will only be replicated in twenty of them.