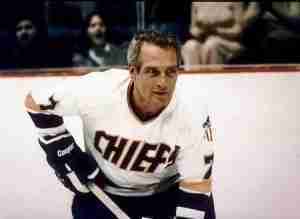 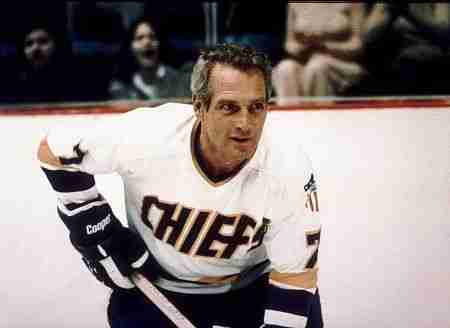 It can’t be disputed that Paul Newman is one of the greatest actors of all time, but for many of us, nowhere was he more entertaining than when he was Reggie Dunlop, the player/coach of the Charlestown Chiefs.

With a lot of snow on the roof of his mid-40’s body, Dunlop was clearly in the winter of his playing career, but his youthful (juvenile?) antics on and off of the ice were balanced by his shenanigans to do whatever he could to keep the Chiefs afloat in the town where the mill’s closing spelled doom for the hockey team.

Like any great athlete, Dunlop didn’t quit.  When he got news that the news that the team was in fact going to fold, he made up a fictional buyer in Florida and with the acquisition of the Hanson Brothers, stumbled upon a goon style of hockey that packed the building.

Dunlop’s ploy didn’t work, as the Chiefs owner was content to fold the team even though the organization became hot, but they did win the Federal League, albeit by forfeit.

The last we saw Reggie Dunlop he was set to ride north to Minnesota to coach a team there, but Slap Shot is one of the most iconic sports films of all time, and Dunlop was the star of the film.

We are very proud to welcome Reggie Dunlop to the Fictitious Athlete Hall of Fame!