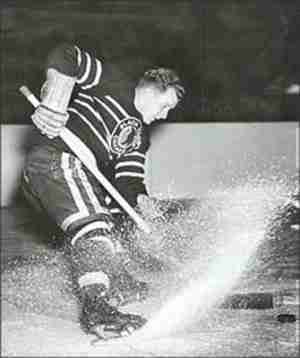 Considered by his peers to be one of the most complete players in the NHL, Doug Bentley really was capable of it all. He could put the puck in the net, was an efficient passer, an excellent backchecker and a good guy to have in the locker room. Bentley would twice lead the league in goals (though this was during World War II when the NHL was decimated in talent), assists and once in scoring and played in five All Star Games. He had the honor of playing on the first complete forward line of brothers when both Max and Reg Bentley suited up for Chicago. Sadly for Doug Bentley, he was on many Chicago teams that were not that good, and despite his long professional career, he only played in 23 playoff games. Still, Bentley is a fine addition to the Hockey Hall of Fame.