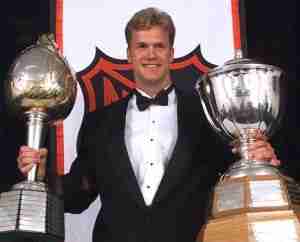 Chris Pronger is a former Hart Trophy and Norris Trophy winner and would twice lead the National Hockey League in Plus/Minus while he was a member of the St. Louis Blues. Pronger would become a four time post-season All Star, a Stanley Cup Champion with the Anaheim Ducks and was a Olympic Gold Medalist with Canada.