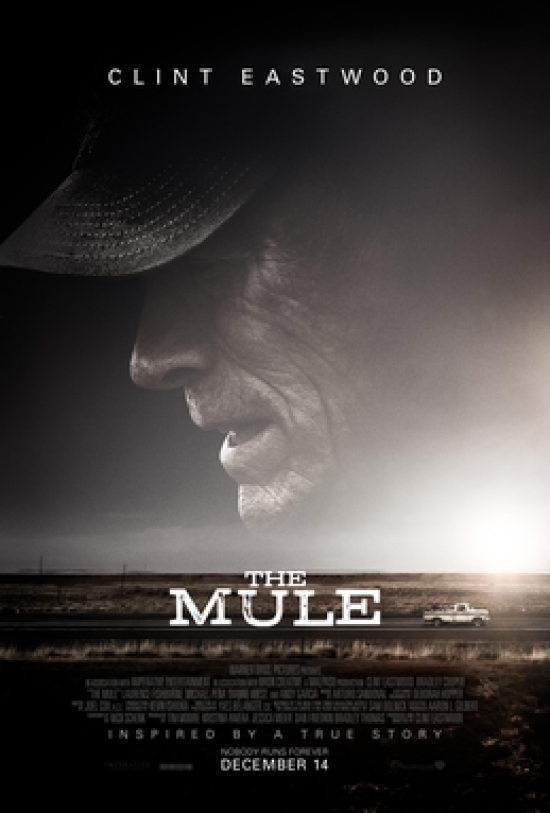 It has been a few weeks since my last blog and review of television and film. This was primarily due to a visit to “La Belle Province” to visit my wife’s family. For those readers who are not Canadian, and don’t know what place I mean, I am referring to the province of Quebec. So with that in mind, I wanted to select a movie for this weekend’s entertainment that I was sure that I was going to enjoy. So I made a trip to the shelf that holds all the unwatched Blu-Ray’s and selected “The Mule” with Clint Eastwood. This film has a few things going for it right out of the gate, first, it stars Clint Eastwood! He is one of my absolute favourite actors! Second, it is based on a true story, this always appeals to me, as for those few that actually read all my reviews, I am very sick of Hollywood’s penchant for remaking films, rebooting or copying ideas. So anything that is “real” will always get my attention. Finally, it is also directed by Clint Eastwood, not only is he a fantastic actor, I rarely see a film directed by Clint that I do not like. So with this holy trinity of ideals in place, we put in the film so that we could be entertained.

So what is this film about? “The Mule” is about Earl Stone (Eastwood), an elderly man who loved his flowers and horticulture business above all else, and that included his family. This was demonstrated by him forgetting his daughter’s wedding and other important family events. However, his love of flowers, and the old way of running a floral business could not compete with technology. This resulted him losing everything within a few years, his home, his business, his daughter and wife. Once the bank took over his home and business, with nowhere else to go, he arrives at his granddaughter’s engagement party with all of his possessions in his old beat-up pickup. This is much to his ex-wife’s (Wiest) and daughter’s chagrin (Allison Eastwood), as they really don’t want anything to do with him. Making impossible promises to his granddaughter on how he will pay for the booze for the wedding (well he doesn’t have a job or home now), he is at his wits end. Another party guest, offers him a job due to Stone’s (Eastwood) love of driving and clean record. With no other option, Stone (Eastwood) takes up the offer and begins transporting duffel bags around the country. He finds these trips to be very profitable, and shortly discovers that he is now a Mule, transporting drugs for the cartel. Not looking a gift-horse in the mouth, Stone (Eastwood) takes advantage of his new found wealth, by not only helping his loved ones and recovering his home, but also making a few purchases to make his life a bit easier. Meanwhile, some intrepid federal agents who are looking to make a name for themselves, agents Bates and Trevino (Cooper and Pena respectively) under the leadership of the Special Agent in Charge (SAC) (Fishburne) decide that they need to apprehend this new Mule who is transporting all the drugs for the Cartel. The film culminates with Stone’s (Eastwood) apprehension by the law and some resolution between Stone and his family.  Again, I am in a situation where I don’t want to give out any more spoilers for this film, as it is definitely worth the watch.

Before getting into the good/bad of the film. Let’s look at the main characters:

Clint Eastwood  as Earl Stone; As mentioned previously, Clint is one of my all-time favourite actors. He was the ultimate action hero before all the special effects and steroids came to be so prevalent in the films of today. When I was a kid growing up, westerns were the craze, and in our household we watched them religiously. My father’s opinion was if it had a horse and a gunfight, then it was worth the watch. I remember many a day watching these films, and our favorite was Clint. He was iconic in Hang’em High, Fistful of Dollars, The Good, The Bad and The Ugly, and the Outlaw Jose Wales. No one could stare, spit, and then shoot with the accuracy of Clint Eastwood. He was Hollywood! Of course he moved onto other films that were equally great, Dirty Harry Franchise, Space Cowboys, Kelly’s Heroes, Unforgiven to name but a few. (However, I still can’t forgive him for “The Bridges of Madison County”, c’mon Clint doesn’t cry!) There might also be a few other weak films. But, overall it was a great career as both a star and director. In “The Mule” he does not disappoint. He continues to entertain with his direction and acting style. One thing we did like about his character was the fact that he played his age. He was not hanging on to the illusion that he could still swing a punch or shoot the wing off of a fly at a 100 metres. He was dramatic, he moved with the shuffle of a senior and his dialogue was also comparative. He is a 90-year-old man and played it as such. No special effects to make him look younger, or a stunt double to make him more spry or agile.  He is what he is. The chemistry between Iris (Allison Eastwood), Mary (Wiest) and Ginny (Farmiga) was believable. Hell, his own daughter played his daughter, it just doesn’t get any more real than that. Stone’s (Eastwood) caring for his wife and granddaughter came through the screen and it added to the effect of the film. One of his final scenes with his ex-wife, Mary (Wiest) was especially poignant and it showed that Clint can actually demonstrate caring and love, not just anger, fists and intense glares.

As a director, he also was spot on. The film was a slow burn, the story slowly unfolded and the tension increased as the film progressed. We witnessed Stone’s (Eastwood) transformation from a man at his peak, to the man being crushed, and then the complete circle again. The dialogue flowed and was presented in such a way that you could almost even picture your own grandfather in the scene. While it might not be considered one of his best works, it was still extremely noteworthy. If this film is his last as a director, it was still an admirable way to finish his career.

Alison Eastwood as Iris: Well as she is one of Clint’s daughters in real life, there is already a bond in place. Also, as his real daughter, I am sure she could project actual events within their relationship to portray the appropriate feelings and chemistry between the two. While she does not have the screen presence of her father, she is still a fair actress and we enjoyed her part within the film. I had to look at IMDB to see what else she had done, and I have only previously seen her in Tightrope and Absolute Power, both films with her father. Obviously, she did not leave that much of an impact at that time if I had to look it up, but in this case, she did a fair job in the Mule and added to the general enjoyment of the film.

Dianne Wiest as Mary: Wiest is a very accomplished actress and always delivers in our opinion. We have enjoyed her in films for many years and she has mastered the mousy persona like few others can. As the Ex wife of Stone, Wiest imparts all the anger and frustration with a man that only an Ex can have, while combining it with feelings left over from the past. Her scenes with Clint were strong and left an impact. As mentioned previously, especially in their final scene together near the end of the film. Another strong performance from Wiest!

Taissa Farmiga as Ginny: Farmiga looked very familiar to us, when checking out her resume on IMDB, I saw that she was in “American Horror Story” an anthology series that we really enjoyed. Now taking that into account, I can see how her acting has progressed since that series. She did an admirable job as the granddaughter, ensuring she presented enough admiration for her grandfather while still trying to placate her mother and grandmother. The scenes with Clint were well done, and I believe that she has plenty of room to grow and expand her career and film resume. She is definitely an actress with potential and I hope to see her in future films.

Laurence Fishburne as Special Agent in Charge: We are fan’s of Fishburne, and have been for many years. However, in this role, his character is not really developed. Yes, he is the supervisor of Agents Bates and Trevino (Cooper and Pena respectively) but besides telling them to make a bust, he has no other impact to the film. Too bad, as we really like him in most of his films and it would have been nice to see him give a greater contribution to the film.

Bradley Cooperas Agent Colin Bates and Michael Pena as Agent Trevino: At this point I will put these two together. Much like Fishburne, they did not have as great a role as I would have liked to see. They were in pursuit of the fabled “Tata” as the cartel henchmen were calling Stone (Eastwood). There were a few good scenes with both Cooper and Eastwood, specifically in a diner and at a hotel, which did set up the ending. The chemistry between the two is pretty good, which is no doubt due to the fact that they have worked together in American Sniper. As previously mentioned, they could have played their parts in the movie up a bit to flesh out the characters, as they were pretty one dimensional through the film. But again, this film was about Earl Stone (Eastwood) not the cops who were after him.

There were several other supporting actors from the Cartel who gave some good performances as well, specifically, Robert Lasardo as Emilio, Paul Alayo as Sal and Daniel Moncada as Eduardo. As members of the Cartel their contribution to the film help enhance many scenes and provide Eastwood the proper characters/personalities to work off of.

So, were we entertained? Yes, we were. This was a solid film directed and acted by Eastwood. It further illustrated his talents both in front of, and behind the lens. The story was presented in a slow burn that managed to boil at the end, just as many of his films do. Was it a Gran Torino or Unforgiven, no it was not, but it was still an enjoyable film with a good supporting cast. In some instances, it would have been nice to see some of the other stars get more film time or development, but the film was good nonetheless. If you are an Eastwood fan, I would highly recommend this picture as it may just be his swan song in the industry. If you like a good drama, then this film is for you as well, not to mention people who like to watch films based on an event or person. If you are expecting an Academy award performance, then you may be disappointed. This is a good film to pass a few hours and catch one of the last Icons from Hollywood tell a tale and perform his art.

If you are interested in other films from the principal cast, please consider the following recommendations: