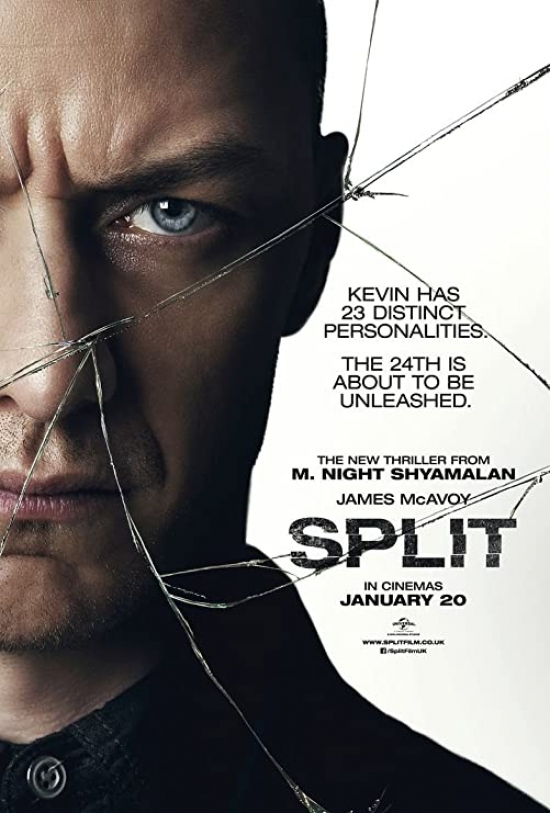 We were quite busy this weekend, so we did not get a chance to watch our weekend film till Sunday Night. In this edition of “Were we Entertained”, we take a look at the 2016 movie “Split”. This film, written & directed by M. Night Shymalan is a welcome return to quality film-making after several of his duds. I have enjoyed Shymalan’s films a great deal in the past, i.e. The Sixth Sense, Unbreakable, Signs were all great films in my opinion. But he also made some serious dud’s i.e. The Village, The Happening, The Last Airbender and After Earth, all films with great potential but lacked the requisite spark to entertain you and make you think about the film. “Split” was a return to great film-making.

Not expecting a lot from this film when I picked it up, (Due to the previous movies mentioned), I had heard that this was actually a sort of sequel to “Unbreakable”, and a must watch if you were going to pursue the third film “Glass”, but I was pleasantly surprised. Not only was this film well directed, written and acted, it kept us glued to the screen. I will try and give a synopsis with out giving out too many of the plot points or surprises away.

The film commences at birthday party for a rather spoiled teenager at a restaurant/mall. The party is over, and she (with 2 friends) and her father are lugging a vast number of gifts and leftovers back to the car. As these kids are pretty much selfish and don’t really help the father, he is left to load the trunk with her spoils, while they proceed to wait in the car. However, the father becomes incapacitated, and a stranger (McAvoy) enters the car. Once inside he sprays the girls with a mist which knocks them all out.

They wake to find themselves in a cell and discover that they are being held prisoner by the same stranger (McAvoy). This stranger appears to have multiple personalities and memories and each personality displays various character traits, clothes and mannerisms to delineate them. All personalities threaten them with the arrival of the “Beast” who will kill them all horribly before moving on. However, it becomes clear that really only 3 personalities are controlling the stranger at this time. Naturally, these girls are all trying to escape before the dreaded “Beast” personality awakens and kills them all. Concurrently, the stranger is also seeing a psychiatrist who is trying to help him with his 24 separate personalities. The psychiatrist, Dr. Fletcher (Buckley), is well versed in her patient’s personalities and soon sees through the deception of the two strongest personalities. She rightfully deduces that the missing girls might be with her patient and they could be in serious danger and subsequently goes to her patient’s home to see. This leads to the climax of the film, where many other personalities are revealed and the girls, the doctor, and the personalities fates collide.

Ok, now to the meat of this blog, the movie and characters themselves.

For a film that I was unsure of at first, specifically due to the fact that Shymalan movies had really dropped in quality, I was very pleasantly surprised. “Split” was a new take on multiple personality disorder. It was expertly presented, with a central character that was both complex and entertaining in the same breath. James McAvoy was the principal star in the film. He played no less than 8 separate characters/personalities throughout the film in a convincing, sometimes chilling fashion. Crumb was the original personality or host if you will, and McAvoy easily transitioned to 7 others in some cases in the blink of an eye. He effectively played a little boy, a stern OCD type, a flamboyant designer, an academic, a proper English lady and the fearsome beast. All acted in a convincing and stellar fashion. This film truly was a vehicle for McAvoy to show his talent in both physical and character acting. As Dennis, the personality with OCD. He was a stern, chilling, almost psychopathic character with no humour, but some very distinct twists. This was quickly followed by Patricia, an almost stereotyped English lady, who with Dennis, controlled Crumb the most. As mentioned previously, there were other characters that McAvoy played within the “Crumb” universe if you will, but my favourite was Hedwig, the little boy. In this character, McAvoy was able to give humour and also a bit of innocence that was lacking in the other characters. Barry was the flamboyant designer who was usually the personality available when meeting with Dr. Fletcher (Buckley) while only glimpses of Jade, Orwell and the host, Crumb were only present for short intervals. The last character present, the “Beast” actually seemed to physically alter McAvoy as he took on this fearsome persona whose ultimate goal were to kill and eat…and apparently not necessarily always in that order. As you can see, I felt that McAvoy’s performance was second to none, he was amazing, altering his voice, persona, appearance and character to fit each personality. If you were not a fan of McAvoy before, after watching this film, you will be!

Haley Lu Richardson as Claire Benoit: As one of the three girls that were captured by Crumb/Dennis (McAvoy), Claire (Richardson) was portrayed as the stereotypical teenager who apparently seemed to lack for nothing. The event was her birthday party that started it all off, and it seems that she invited her whole art class, even people that she did not really care for i.e. Casey (Taylor-Joy). Once she awakens in her cell, it is clear that there is a delineation between the 3 girls as Claire (Richardson) and Marcia (Sula) stay together on the same cot, while Casey is left on her own. Her main contribution seems to scream and shout ideas on how to escape. While she does effectively escape from their cell (not the compound), she is caught again and is placed in another room to await the Beast. I have not seen in her in any other show that she has been in, so I can’t really comment on her resume of work, but she was not bad, but not great either in this role. Easily forgotten in the grand scheme of the story.

Jessica Sula as Marcia: The second girl of the trio is also new to me, she has been in a number of shows, but nothing that I had watched in the past. In this film, she is the typical follower. She agrees to everything and will follow whatever Claire says, and later, Casey. She too is separated from the others to await her demise. Marcia (Sula) does not really garner any emotion from the audience and actually after awhile I found the whining kind of annoying. Luckily she is not really a central character, but just one of the hapless trio who were captured. I hope that as she gets older and has more experience, that her roles and acting will progress.

Betty Buckley as Dr. Karen Fletcher: Fletcher (Buckley) is the psychiatrist that is treating Crumb (McAvoy) et all. Usually dealing with the Barry character, she appears to have had some exposure with many of the personalities within Crumb. Trying to increase her own stature within the psychiatric community, she uses her patient as a case study in several forums. However, it is she, who is first realizing that some of the more “evil” personalities are at the forefront and are trying to control Crumb at all costs. Knowledgeable in dealing with cases such as this, she does manage to provide Casey (Taylor-Joy) with key information in the film’s 3rdact which will prove to be pivotal. Fletcher’s role is extremely important throughout this film as it manages to find the missing pieces for the audience and helps (them/you) put the missing pieces together. A solid actress of many years, Buckley has been around for decades, heck, I even remember watching her as a kid in “Eight is Enough” in the mid 70’s. So she has had plenty of time to perfect her acting skills. As Dr. Fletcher, her performance was solid and the chemistry between her and Crumb (McAvoy) was believable. Her character was a great contribution to the film and story line itself and without her, there would have been several plot holes that would have been hard to fill.

Anya Taylor-Joyas Casey Cooke: The other principle character in this thriller and third girl who was abducted at the party. Casey (Taylor-Joy) is a troubled teen who came from a dysfunctional background. Her flashbacks tell a tale of abuse by a perverted and sick uncle and the unexpected loss of her father at a young age. She is a bit of a loner, only invited to the party as she was a class mate, and not really a friend of the hostess (Claire). However, in her case, it was the prime example of being in the wrong place at the wrong time. Once awakened in the cell, it is Casey (Taylor-Joy) who starts putting all the pieces together, and actually comes up with several ways to confuse and even manipulate their captor(s). Casey (Taylor-Joy) comes across as a very intelligent young lady and manages to wear the mantle of heroine very well. She easily sees through the changes and character traits of Crumb’s (McAvoy) many personalities and has an excellent rapport with some of them, specifically Hedwig and Dennis. Her final confrontation with the “Beast” is thrilling and manages to close several story lines. Not wanting to give away the climax, it is safe to say that their encounter is full of tension and action. As you can see, Taylor-Joy and McAvoy make the film and it is their chemistry between them (regardless of the personality) that makes the film so enjoyable. As with the other girls, I have not watched anything that she has been in, but I will look for her in upcoming films. I think she has some great talent, and I can only imagine what the future may bring for this young actress.

Overall we really enjoyed this film. It had suspense, comedy, horror and thrills all in one. The cinematography was excellent and the 2 key players (McAvoy and Taylor-Joy) were phenomenal in their roles. It literally kept us glued to the screen for the duration of the film. If this is what Shymalan is returning to, then I for one applaud it. Overall, the film was thoroughly entertaining and I look forward to watch the last film in the trilogy, Glass. If you are looking for some quality acting and a story that will keep you glued to the screen, then I recommend “Split” to be one of your next viewing choices, I am sure you won’t be disappointed!

If you are interested in films from the main actor, consider the following recommendations: