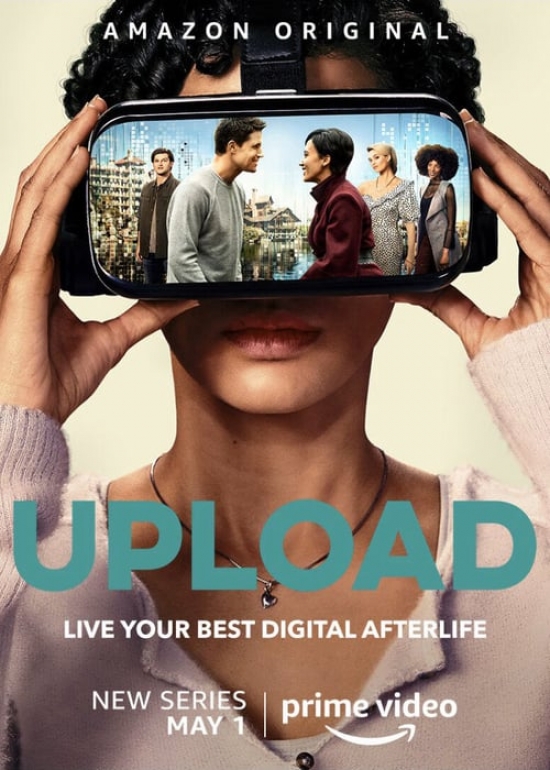 For this week’s entertainment, we decided to binge watch a new show that is on Amazon Prime. “Upload” is a new Amazon original starring Robbie Amell, Andy Allo and Allegra Edwards. It is a new and refreshing concept on the afterlife, with just enough social messages to keep it relevant to today’s society. Not only is this show a little stimulating and new, it has already been renewed for a second season, just one week after it’s initial release on Amazon Prime.

So what is “Upload” about? It is the near future, and a technology has been developed that will allow your memories, personality, thoughts and dreams to be uploaded into a giant server just prior to your death. In this new version of “heaven” a person can live a new and full life while they are waiting for a new technology “Download” to be developed thus allowing people to be reborn in a new body with all the soul of the original, basically creating immortality. The series starts off lightly, with our intrepid hero, Nathan Brown (Amell) deciding to drive his autonomous car manually, however the car has other ideas and takes over. Needless to say, in short order the car’s Artificial Intelligence (A.I.) fails and it runs headlong into a massive truck, thus severely injuring Nathan (Amell). Once at the hospital, his fiancée, Ingrid (Edwards) implores the staff to have him uploaded into one of the upper class, post death, virtual worlds. Once uploaded, he awakes and finds himself in a nice suite, that resembles one of the posh resorts in upstate New York. He is surrounded by the avatar’s of other well to do people and starts to make friends. (In this world, I guess you really can take it with you when you die!). Nathan (Amell) soon discovers that everything that he wants to do costs money, not his, but that of his fiancée (Edwards) who is financing his death. These costs are in the form of in-app purchases, the first time I saw that happen I could not stop laughing as this what the real world is these days. Nothing is free, and everything costs money! In that light, Nathan (Amell) must keep his fiancée happy (Edwards) so that she keeps him funded and his electronic avatar alive.

His Angel, (or if you will spirit wrangler) Nora Antony is played by Andy Allo. Her job is to make his transition and virtual stay as pleasant as possible. Nora (Allo) is pretty much tech support, wrangler, and customer assistance rolled all up in one. Searching for the elusive 5-star rating from all of her clients, she is trying to make ends meet for herself and family as well.

The script is well written and the chemistry between the main players works. The feelings portrayed by Edwards and Allo are expressed in a believable fashion, not to mention the confusion and empathy portrayed by Amell. All facets of the cast fit each other, and the supporting cast works well.

As this series is new, and I don’t want to give out any spoilers, I will just lightly touch on the cast and what I thought of their performance.

Robbie Amell as Nathan Brown: Amell plays this role well. At the start of the series, he is as shallow as a puddle, but as he actually grows within the virtual world he becomes kind, empathic to those around him and actually becomes a better person, even though he is dead. His chemistry with the other cast members and supporting characters is well played. Even though he seemed familiar, I could not place him in anything else I had watched till I checked IMDB. Once verified on IMDB, I saw that he was a guest on the Flash for several episodes, and I remember the character he played. I think that he has potential and look forward to seeing him in other movies and shows.

Andy Allo as Nora Antony: Actually this character is my favourite in the series. She is fresh, pulls off the innocent and naive card very well and has great chemistry with Amell. I have not seen her in anything before, and when checking her resume on IMDB, she has not been in a hell of a lot, thus the reason why I had not seen her. However, I find her to be quite good and now that I see that this is renewed for a 2ndseason look forward to watching it and seeing how her character evolves.

Allegra Edwardsas Ingrid Kannerman; Edwards does a great job as the narcissistic, pretty fiancée who is more concerned with how she looks and how others perceive her than what really matters. What I like about her character that we do find out that she really does love Nathan, and only wants what is best for him. Her character displays growth as the show progresses, and as much as I did not like her at the start of the series, by the end of season 1, she kinda grew on me. Even though some of her character traits are completely stereotyped and we have seen that type of role before, she does play it well. I had only seen her in “Friends from College” before, but I believe that she has some talent and hope that she does not get stereotyped into those kinds of roles.

This series is hard to pigeon hole as for a genre, it is a mashup of comedy, sci-fi, murder mystery and love story all in one. It actually appealed to both my wife and I, but for different reasons. Were we entertained throughout the season, yes we were. Like any other show, some episodes are better than others, but if you want something to watch that is light, new and does not really fit into any genre, then I would recommend “Upload” for you.