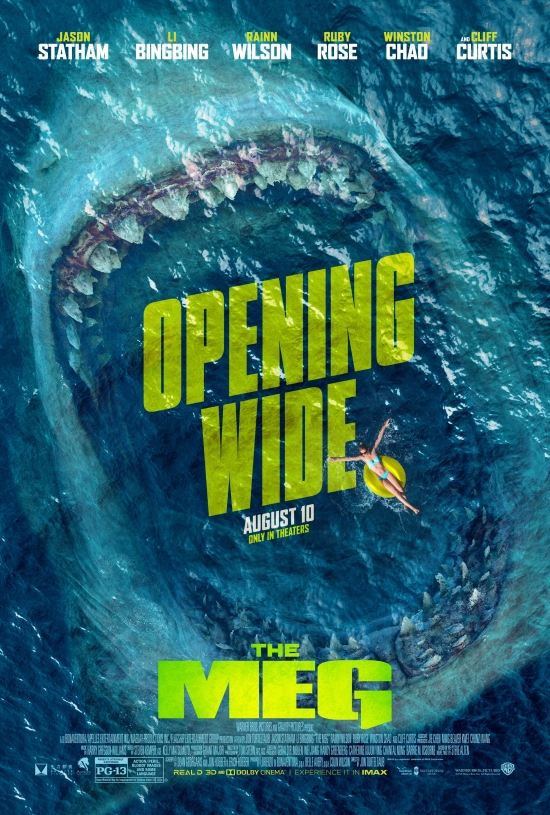 As we are all still locked down and there are limited choices of activity for us all due to the epidemic, my unwatched movie collection is starting to dwindle down. After having a dinner from a local take-out establishment (we do have to support local business’s at this time) I grabbed the next movie in the pile. This week, it happened to be “The Meg”. I had seen bits and pieces of this movie a few years ago when returning from a conference in Europe, but as with all trans-Atlantic flights you never really get to appreciate a film, or even watch it completely due to the many interruptions. Anyways, with a full belly, full glass of wine in hand, I put “The Meg” in the blu-ray player for this weekends entertainment.

What is “The Meg” about you ask? Well “The Meg” is a quasi action/horror/sci-fi/comedy film that rips-off or pays homage to (depending on your perspective) several movies in Hollywood history. In essence this film is a Shark flick, with a hint of Jaws (plus sequels), The Abyss, Leviathan, Deep Rising and Piranha. I saw elements of each film in this action/comedy/horror/sci-fi romp starring Jason Statham. Before I start outlining the good/bad of the film, I will give a bit of a plot summary.

The film opens with a submarine that is disabled on the ocean floor and a rescue team and mini-submersible are on site trying to save everyone. The rescue team is led by a stone-faced Jason Statham, who instead of fighting a number of bad guys is now fighting the elements. During the rescue, we see a submarine that is taking on water and a hull that is crumpled up in sections (The Abyss?). This tension is further heightened (?) when the sub is shaken around a bit and a portion of the hull commences to be crushed in a way that resembles a large bite…hmm dramatic foreshadowing perhaps? Jonah (Statham) can’t save them all, so he releases the docking clamp and surfaces with only a portion of the crew, leaving a number to die to an unknown fate.  However, it appears that Jonah (Statham) is the only one who believes it is a sea creature and the rest of the world perceives him as a coward who lost his nerve and that he left people to behind to die. Cashiered out of deep sea rescue (or whatever he was in, Navy, Coast—guard, who knows, it is not really mentioned), he moves to Thailand (?) and commences a stereo typed life of a burn-out who is just drinking his life away.

Meanwhile…. a company owned by Billionaire Morris (Rainn Wilson) creates a huge state of the art Ocean lab. This Lab is located in the South China sea (somewhere) and its purpose was to prove that the ocean was even deeper than imagined. The theory was that the sea bottom was actually beyond a thermal layer of cold water, and they were going to prove it. Enter a new group of intrepid travellers, Lori (Mcnamee), The Wall (Olaffson) and Toshi (Oka) are in a mini-submersible who penetrate the layer, and discover a whole new undersea world. Supporting this submersible is a whole cast of characters, the team leader Zhang (Chao) his daughter Suyin (Li) and granddaughter Meiying (Cai), Mac (Curtis) Jaxx (Rose) Kennedy (DJ) and the doctor Heller (Taylor). Observing the whole experiment is the wacky owner Morris (Wilson) who actually has his own agenda beyond that of the team leader Zhang (Chao). Now back to the submersible, while exploring, their mini-sub is attacked by a giant squid, followed by a save and subsequent attack by the Meg. The submersible is disabled, and the crew wounded. The Lab’s crew and owner watch this on their monitors and realize that there is no way to save them. Mac (Curtis) knows that his friend is lounging around on a nearby island goes to retrieve him (Jonas/Statham) and he is the only guy who can save them…even drunk. (Note: Maybe Toshi (Oka) should have used his special powers like he had on Heroes to save them…but that is just my imagination running wild here as the story could not quite keep me completely tuned in!)

The ever drunk Jonas (Statham) at first refuses to help, until he finds out that the damaged submersible is captained by his ex wife Lori (Mcnamee), and he naturally sobers up and signs up for the dramatic rescue. Jonas (Statham) and Mac (Curtis) return to the lab, Jonas meets the rest of the crew and owner. Finds out the doctor on the lab is the same one who called him a coward in the navy/coast guard/rescue team or whatever and still does not trust him and think that he is a coward. This results in some poorly acted tension between Jonas (Statham) and Heller (Taylor). Concurrently Suyin (Li) has taken matters in her own hands and has launched a “glider” to rescue the downed submersible and pull them back to safety. However, this is only a failed attempt at rescue and tension. Sober and full of action, Jonas (Statham) now has 2 submersibles to save. Needless to say, Jonas saves the two submersibles (but not everyone) returns to the lab and is thanked by all, not quite all… he does get some blame for leaving someone behind. However, unknown to the crew, due to their incursions a leak in the thermal layer is created and has allowed “The Meg” to escape to our waters. “The Meg” scares a few people in the lab, and then commences to wreak havoc in the surrounding waters. This “Meg” is a shark that is upwards of 70 ft long, approx. 70 tons and has a bite more powerful than a T-Rex. As all sharks are, the Meg is continuously hungry and searching for food, and just scary enough to make you jump every once and a while!

Jonas (Statham) and crew take it upon themselves to save the world as we know it and commence to track the “Meg” down to kill it. This is pretty much a foregone conclusion, as what would the movie be if the intrepid hero was not successful in this quest. They have some great adventures, a few laughs and some half decent special effects finding the Meg, tracking it and subsequently taking it down. Concurrently, some characters find love, themselves, inner strength, or even find out that they are destined to be lunch for the “Meg” itself. I glossed over the last part of the movie to not give out too many parts away if you have not yet seen the film.

Now to look at the Good, Bad and Ugly of this film.

The Good: The CGI was actually pretty good and the chemistry between the main characters flowed satisfactorily. It was nice to see Statham in an action film where he did not have to fight 500 bad guys at once, but actually had to fight the elements, the “Meg” and actually his own fear. His dry humour was an added bonus as well as that of Morris (Wilson). There were numerous one-liners that did not make you laugh out loud, but at least give you a smile or even a slight guffaw. The interaction between Jonas (Statham) and Suyin (Li) was not bad. The acting was good enough for their flirtation to be somewhat believable (as believable as you can be with Statham trying to be romantic). Also, we found that the child actress who played Sunyin’s daughter Meiying (Cai) was adorable and added the right touch of “cuteness” you could say to the action movie. Additionally, either the intentional homages or blatant rip-off’s of other films were also not bad. We especially enjoyed the beach scene when the “Meg” was swimming around the crowded bay, looking for snacks. There were several instances that were right out of Jaws and it immediately too me back to that film, when I saw it as a kid. If you watch the film, you will see varied aspects of the previously mentioned films, Jaws, Piranha, Abyss, Leviathan in there as well. I will leave it to you to decide if they wanted pay respect to previous films, or just planned to rip them off! (Actually a side comment with respect to Statham, it is clearly evident that he is no stranger to water as his dives and swimming are smooth and fluid. For readers who are not aware, he was once a member of the UK diving team and participated in the 1990 Commonwealth games!)

The supporting cast of characters were also enjoyable. Morris as the idiot billionaire was humorous and added levity right until the moment his character was an active participant of the Meg’s dinner requirements.

The Bad: There was a touch too many cliché’s in the film. Statham playing the burned out drunk who is looking for redemption. Heller (Taylor) being angry when Jonas (Statham) first shows up but then apologizes as he sees the error in his ways, and then seeks his own redemption. This is just an example of too many “stereotypes” that could have possibly been written better and with a little more imagination. However, I must add, that these factors did not overly detract from the film, it became what was expected.

The Ugly: Many reviewers will have varying viewpoints on this with respect to “The Meg”, but for me, I would actually say the dialogue was the ugly, it struck me as very clichéd, and at times stilting. Yes, there were a few jokes and one liners that I found amusing, but nothing really imaginative or new here. Also, some of the supporting characters and even Jonas himself could have had more character development to show the “Why” or purpose of their contribution to the film writ large.

Did I enjoy the film and was I entertained? Yes, I was entertained, but the film is not something that will win any awards or make you call for more. It was just good enough for me to watch it all, laugh a bit and enjoy the special effects. Would I recommend it? Only if you are a fan of Jaws type films and quality acting and dialogue is not a must. I have seen better films with some of the cast, and also some worse ones. But it will kill the time if you are so inclined to give it a try.

If you are interested in other films with the main cast, please consider the following