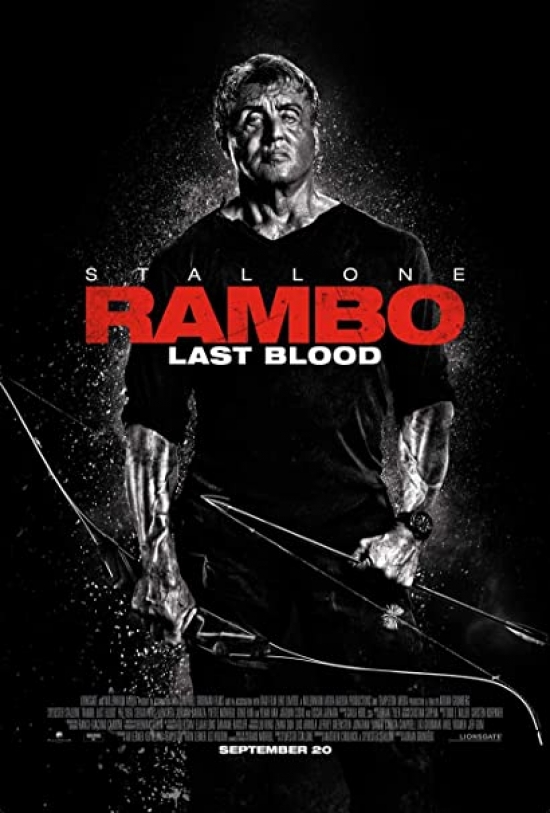 So Saturday night arrived, and instead of reaching into my stack of unwatched blu-ray movies, we decided to find something on one of the streaming services that we subscribe to. We started with Amazon Prime (their search engines are just as crappy as Netflix by the way), and I started scanning through what was new on Prime. Well lo and behold, I came across Rambo: Last Blood. I remember last year when it had a short stint in the theatres, and was surprised that it was already on the streaming services. Hell, I had not even seen it for sale on Amazon yet, so I was pleasantly surprised. Now, I loved First Blood, it was a fantastic film that set the tone for action movies of the era and really set Stallone’s career on the action trajectory after the fan base he created in the Rocky series. Not only was it a great movie, it was also a great book by David Morrell.

The original that started it all, had John Rambo (Stallone) a highly decorated Special Forces Vietnam Veteran come to small town USA to visit one of his Army buddies. Ushered out of town by the local Sherriff Teasel (Brian Dennehy) who took umbrage to Rambo (Stallone), with his long hair etc. This action set the scene for all of Rambo’s rage and frustration to be unleashed on the Sherriff and the unsuspecting town. Needless to say, Rambo was victorious over the Sherriff, he escaped and started a series of films in the Rambo universe (First Blood 2, Rambo 3, Rambo and now finally Rambo: Last Blood).

However, this review is not about previous Rambo movies, it is to discuss the latest one in the Stallone Franchise. Rambo: Last Blood has to be one of the worst pieces of fecal matter that Stallone has ever produced, and this is being generous. I watched the whole film, desperately looking for something to redeem it and make me like it. Unfortunately, I could not find any redeeming feature in this film, except maybe the gratuitous violence that was present in the action sequences.

Before I really start bashing this film, a small overview of the plot. It is 11 years after his last film and he is now living in Arizona on the family homestead with an elderly lady and her grand-daughter. The grand-daughter Gabrielle (Monreal) calls him her uncle and looks up to Rambo as a surrogate father. However, in other films I do not ever recall a scene where he mentions that he has a sister. But I watched them so long ago that I may have missed it. On the ranch, Rambo has meticulously recreated a series of tunnels under the property. These tunnels are reminiscent of the tunnels the North Vietnamese army had constructed during the Vietnam war. Contained within the tunnels as a piece of dramatic foreshadowing, is enough weapons to arm a small south American nation. To add to the tension on the homestead, Gabrielle (Monreal) is searching for her father who left when she was young. Unexpectedly, Gabrielle (Monreal) is contacted by a departed friend who is back in Mexico and has discovered where her father is and calls Gabrielle to come and see.

Naturally Gabrielle (Monreal) makes this fateful trip, against the wishes of her grandmother and Rambo. Rambo even gives some long winded speech on how she should drop the search..yadda yadda. Yet, like all teens she does not listen and heads south. Once in Mexico, she meets up with her friend who escorts her to her father’s abode, where she discovers how much of an asshole he truly is. They subsequently go to a bar to drown their sorrows and Gabrielle (Monreal) is given a roofie and becomes part of a stable of teenage prostitutes.

Now Rambo finds out and goes to search for her (naturally), finds her friend, pushes her to show him where she was abducted. Once there he “persuades” the scumbag who drugged his niece to tell him where she was taken. With this information in hand he arrives at the gang HQ, does a poor recon of the area and subsequently gets his ass kicked 15 ways to Sunday by the gang and its leaders. These leaders, two brothers, Victor and Hugo Martinez run this gang of sex traffickers, druggies, arms merchants and whatever else that is bad in the world. Beaten to a pulp and looking like Rocky did when he lost, Rambo (Stallone) is graciously let go by one of the brothers (Hugo) after the other (Victor) leaves his mark on his face with a bowie knife.

Enter Carmen (Vega) a freelance journalist who is also watching the Martinez brothers (as we later learn her sister was taken and killed by them). She saves Rambo, patches him up and gives him some information on them. After a number of days, he has healed a little and goes to save his niece. (Now, at this point the movie had already exceeded my tolerance for bad, yet I kept watching.) Rambo enters the brothel where his niece was being drugged/raped, kills all kinds of guys, with a hammer no less, grabs his niece and escapes. They have some more heartwarming dialogues in the truck on the way back home, but unfortunately it was too late. Gabrielle (Monreal) succumbed to her injuries and passes away. Rambo (Stallone) takes the body home and buries her in the family graveyard, prepares his home for battle, and then returns to Mexico. With the help of Carmen, he finds Victor’s home, kills countless bad guys, decapitates Victor (Jaenada) and pretty much has demonstrated that he is still a one-man army (Even if he is 69 years old), and that he is still a force of nature to be reckoned with.

Accepting the challenge and seeking revenge, Hugo (Peris-Mencheta) leads his gang into the US via a tunnel system that would make El Chapo envious. What is now amazing, is that most of the gang is now equipped with modern military equipment and weapons. Additionally, they are conversant with military tactics and hand signals…wow… I did not know that gang’s ran a basic training camp?  But I have digressed yet again, Hugo (Peris-Mencheta) and his gang of ne’er do-wells have a convoy of expensive SUVs and approach Rambo’s Ranch. Now remember, I did say he had enough weapons for a small army, but that’s not all! Prior to their arrival, Rambo (Stallone) has secreted weapon caches all through the ranch and tunnel complex. Installed booby-traps that were reminiscent of “Home Alone” and prepared his place for the final attack. The vehicles enter the land, some get blown up out of hand and now it looks like more bad guys than you could expect have now appeared for battle. What is the most comical is that Hugo (Peris-Menchata) decked out in black para-military equipment, sporting a man-bun (or as I call them, Millennial Mullets) leads his now crack team into battle with series of hand signals and tactical élan.

Still not far-fetched enough for you? Rambo (Stallone) now eliminates all of Hugo’s entourage (for some reason I found more dead guys here then were actually in the trucks) and continues to taunt Hugo and swears he will rip out his heart! After about 15 minutes of fighting, with only Hugo now remaining, Rambo wounded in 2 places (shoulder and side), he corners Hugo in the barn and manages to expertly fire several arrows into him (remember he has a bullet in his shoulder and side, but can still aim and have a steady hand) thus pinning him against the wall. Think that is it? Nay Nay my friend, now Rambo is in a cheezy kung-fu film, approaches the bad guy, says some lofty crap and then stabs him in the chest, rips out Hugo’s heart and puts it still beating in his face. Wow, is that even possible? But it is ok, he is Rambo, all the bad guys are now killed, Rambo goes to his porch, sits in the rocking chair for some needed rest (he is 69 after all), reminisces about his life and then the screen pulls back…great spot to end the film (finally), but no…it is still not over. Rambo is now Shane (if you have ever watched the classic western), and he has mounted his trusty mustang and gallops off into the sunset. My god the film is now over and the punishment can cease. I still can’t believe I sat through the whole thing!

If you have read this far, you can easily determine that I did not like this film. I am a fan of Stallone movies, I like them for what they are, and will even let some far fetched, outrageous actions go in his films. But this was the worst by far of all of his films. (Well except, Stop! Or my mother will shoot! Which was even worse). Throughout his career, Stallone has created several iconic characters (Rocky and Rambo specifically) introduced the audience to other memorable action films and ensembles (The Expendables trilogy, Tango and Cash, Demolition Man, Escape). Each series or film was memorable in their own right and provided a great deal of entertainment. Rambo: Last Blood was like a traffic accident, I had to watch to the end to see what other crap he could pull out of his proverbial butt to make this film move along. Even the fact that the extended length was 89 min in total, it was actually 88 minutes too long for my taste. I am aware that some fans of the genre and Stallone will defend this film, and that is their right. However, in this house, it was a deemed a horrible experience under the guise of trying to entertain us.

Stallone has to accept his age and pick movies accordingly (i.e. like Clint Eastwood). He did this with Creed where he was the mentor to Apollo’s son. What could have and should have happened in this film is this: Rambo teaches his niece the skills that she would need to survive in combat, she finds out from her friend that her father is alive. She then goes to Mexico, finds her friend and meets her father (we can leave him to be an asshole here). They go to the bar to drown their sorrows, the friend is taken and put into prostitution. She goes back home, tells Rambo, he helps outfit her, they rescue the friend, and the niece does most of the fighting. On the way home, the friend can die from the injuries, bury her in the family plot and then prepare the ranch for battle. Once prepared with all the booby traps that McCauley Caulkin would want in home alone, they return to Mexico to seek revenge. She kicks proverbial ass, kills one brother and issues a challenge to the other. Rambo and niece return home and wait. When Hugo shows up with his entourage, the niece can run around like Lara Croft and wipe out most of them while Rambo is in the with a sniper rifle and detonators to fire off the explosions when needed. Rambo gives her the tactical support for Gabrielle to wipe out Hugo and his band, save the day and then both ride out into the sunset. They could even have something after the credits where his niece is now in the military and becomes the first female Special Forces operator or something, and he claps from the stands on her graduation parade. This idea/version might have been more entertaining than the fecal matter that was in this film. Oh well, I suppose he got his paycheck and moved on to the next project…hmm, maybe Rocky: The Musical? Who knows?

Anyways, our rating for Rambo: Last Blood: 2/10 (it only got the 2 stars for the action sequences, otherwise it would have been 1 star).

If you want to watch some good moviesstarring the main stars: