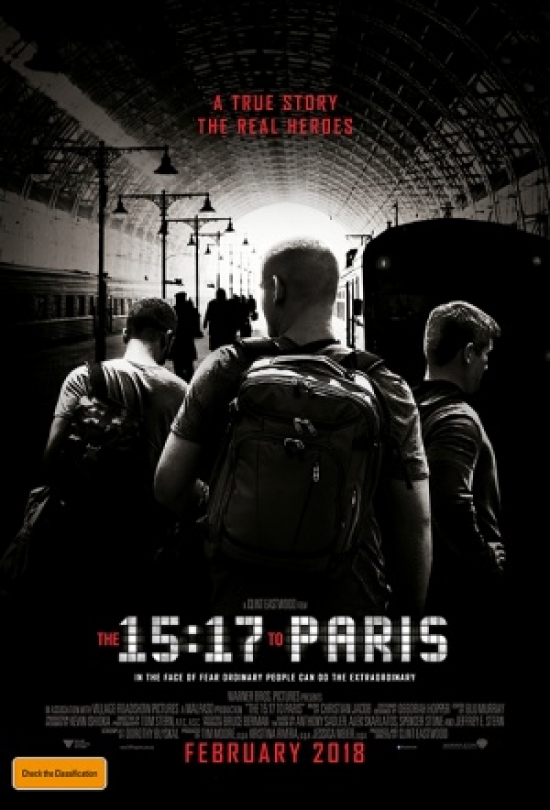 This week we decided to go for a movie that was supposed to depict a true event…ok we did not decide this, it just happened to be the next movie in the pile of Blu-Rays that we had not watched. The movie for this weekend was “The 15:17 to Paris”. This film outlines the events that occurred on August 21, 2015 when 3 American tourists thwarted a terrorist attack on the Thalys Train #9364 that was bound for Paris. Not only does it present the actions of the day, it also depicts the lives of the three main characters, Anthony, Spencer and Alek, and their friendship over the preceding decade.

There were several things that intrigued me about this film right out of the gate:

Now let’s talk about the film itself, as this is a historical event, we all know what happened here. A terrorist boarded the train #9364 bound for Paris. He was armed with an AK-47 and some 300 rounds of ammunition. Once he (the terrorist) decided to move and take action against the passengers of the train, a number of people stepped up to take him down and disarm him. In the case of this film, primarily the three Americans. These 3 men, friends since their teens had decided to travel and see Europe. Of note, two of them were in the service (1 National Guard serving in Afghanistan and the 2ndin the Airforce undergoing training). These 3 have some great adventure in various parts of Europe on their holiday before boarding the train to take them to Paris on that fateful day. This film also intersperses a number of flashbacks on the origin of their friendship, key events in their lives that molded them, and some joint experiences that they shared. The acting may not have been the greatest throughout the film, but we did not mind that. These guys are not professional actors, they are portraying themselves, and probably had some difficulties doing so in front of a film crew etc. To me, this was not about the acting, it was about the event, so I could forgive many areas where some critics would lambast the film. For these critics, I would ask, how would you portray yourself in a film? Would it be exactly as you are, or as you think people would see you? Who knows, in this instance they (Alek, Anthony, Spencer) told the necessary story of the event and the key time periods that made them what they were.

In the film there were some notable co-stars who we recognized, for example Judy Greer and Jenna Fischer who played the mothers of Spencer and Alek respectively. Their performances were not stellar in any way, or even good, but they were needed to help portray the early lives of two of the main characters. Actually for a supporting actor, we liked Thomas Lennon as the school principal. We always find him amusing in all his films and TV shows, however, he does not really have too many arrows in his quiver with regards to style or substance in any film. He is always the same, but yet, we find him funny. He played the smarmy principal just right, and I imagine it was just the way that the three young men remembered him. Do any of us have great memories of any Principal that we were sent to when we were young? I am sure in every one’s mind, the memory of the school Principal who tried to discipline you is not the same as the actual person. Again, for us, we found him amusing and his portrayal fit for the film.

Now for the bottom line, were we entertained with this film? Actually we were, not because the acting was superlative or even of a mediocre quality, it was the story and the event that we enjoyed being told. I think the parts of the film that intrigued us the most was that it was the actual participants play themselves in this movie. I would even watch it again…. however, probably for the last 20 minutes and the scenery. Would I recommend this to others? Hmmm, I think in this instance it would have to depend. Do you have a knowledge of current events and would enjoy this type of film? Can you accept that the acting is poor, but the people are real and just watch it for the story? If you answer yes, then I would recommend this film to you. If no, then move on to something that is more your taste, whatever that may be.