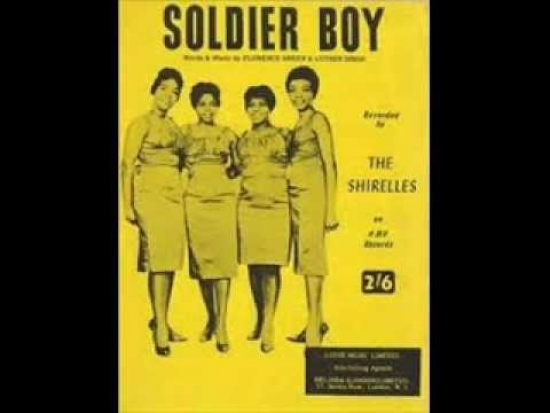 A Google search of “Soldier Boy” sadly spins out “Soulja Boy”, who in my mind is one of the worst things to happen to Hip Hop since Vanilla Ice.  Now that I got my crusty old man bit out of the way (or channeled my inner Ice-T, who had a comical feud with Soulja Boy by basically saying his music was crap) I can talk about the Shirelles, “Soldier Boy”, their second and final number one song on the Hot 100.

I have already talked about the importance of the Shirelles and how they were one of the groups who laid down the blueprint for girl groups throughout the 1960’s and since their first number one would have three more Top Ten hits, including “Mama Said”, which would become another of their more famous songs, as would their first ever hit, “Tonight’s the Night”, a song now regarded as one of the better of its era but barely grazed the Top Forty when it was released.

With “Soldier Boy”, the Shirelles sang in their sweet way (They could make reciting a grocery list that way) about waiting for their love who was overseas serving their country.  A song with this topic probably couldn’t have worked a few years later when America escalated their military presence in Vietnam and songs involving soldiers were quite different, but in 1962 this could work, and the Shirelles were the perfect group to do it.

The Shirelles would only have one Top Ten after and would fade away to other girl groups from Motown that they helped to inspire.  The group would however be remembered for their achievements with an induction into the Rhythm & Blues Hall of Fame in 1994 and the Rock and Roll Hall of Fame in 1996 and would place two songs (“Tonight’s the Night” and “Will You Love Me Tomorrow”) in the Rolling Stone 500 Greatest Songs of All Time.  Thankfully rock and roll history remembered the Shirelles as Bob Seger wasn’t always correct when he told us that “Rock and Roll Never Forgets”.   As we have seen, it forgets a hell of a lot.[1]

[1] Maybe that is because rock and roll is often drunk or snorting cocaine?

More in this category: « Johnny Angel Stranger on the Shore »