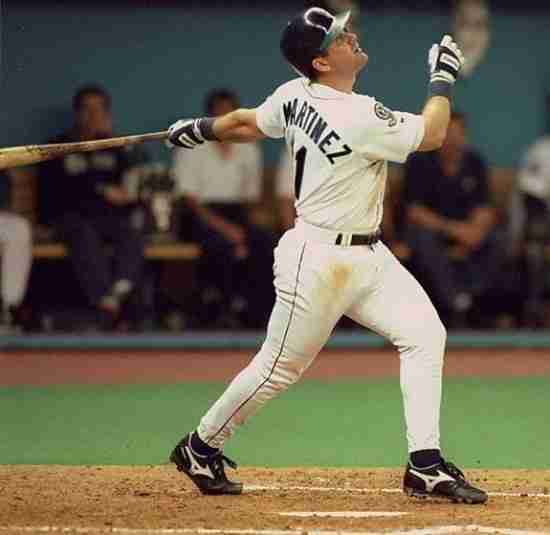 Chairman: There is only one thing that tires me as much as the PED debate.  That is the Designated Hitter debate.

Edgar Martinez is on the ballot again for the seventh time after finishing with 27% last year.  This may be an increase from the year before but still way down from the 36.5% he received in 2012, so for him to have any shot a stagnant percentage eliminates him in my mind.

Is Edgar the best Designated Hitter ever?  Fans of David Ortiz may disagree, but the regular season stats put Edgar there with a sick Slash Line of .312/.418/.515, and is 68.3 in bWAR, which puts him at 111th all-time, a number that while does not make him a lock for Cooperstown, doesn’t blemish it either.

There are a lot of old school people who hate the DH, and for me, I have always appreciated that position for what it was.  Maybe because the DH is as old as I am or maybe because I live in an American League East city but this position, which can make your batting lineup isn’t going away and I am hoping with the elimination of old school writers from the ballot that this is the year he receives a sizable increase for those who respect the position.

Spheniscus: Just how old school are these people? If you were in your formative fandom years (say 8 to 11) when the DH came to be in 1973, you are getting AARP Magazine right now. And having pitchers hit is dumb. I enjoy the National League rules in theory, but not in practice. For while there is more “strategy” involved in a National League game, the strategy involves more at bats by worse players. There are a few exceptions (Micah Owings comes to mind), but in general in a National League game you are giving away a minimum of two outs a game as a team because… tradition? As a Red Sox fan, were we somehow denied a quality product because David Ortiz batted instead of Tim Wakefield, Jon Lester, and Clay Buchholz? If you answer yes, you are either lying or in a mental institution.

Anyway, back to Edgar Martinez. Martinez is no worse than second on the greatest DH of all-time list (provided you actually count Paul Molitor as a third baseman). I personally have him behind David Ortiz, but Edgar has the WAR advantage. Either way Edgar Martinez should be a Hall of Famer and with the 10 year limit will not likely be elected within the next four years. But he seems like the perfect candidate for a senior committee. One team guy, not a sniff of scandal, long and impressive career. He just will be lucky to sneak over 30 % this year.

Chairman:  I wonder if I am jaded because the first DH in my consciousness as a Jays fan is the legendary Otto Velez?

Still, Baseball is a victim of its own traditions, some of which are great, and some are just so outdated, even when the tradition made little sense in the first place (Managers wearing uniforms, haven’t we got past that yet?) and maybe that is why younger fans tend to look past it in favor other sports.

It is time to recognize the position and not the tradition that half of the league found antiquated over forty years ago.  Edgar is where you start, but you’re right.  He will need the Veterans to help him out.  Hopefully that is a committee of Winfield, Yount, Molitor and Thomas.

Spheniscus: Having Randy Johnson and about to be elected Ken Griffey Jr. probably wouldn’t hurt either. I am all in favor of cronyism when it rights a wrong.

While we can agree to disagree about who the better DH is, we both agree that Edgar is a Hall of Famer. Just not under the current system because, again, being a closer means you have a position but being a DH means that even the mention of putting you in the Hall is an abomination and apostate to all that St. Abner Doubleday held dear.

I don’t know what it is going to take, but Edgar Martinez is a Hall of Famer. He just is. It shouldn’t have taken him this long and it is going to take him long enough that he won’t have time to build momentum under the new 10 year rule, (speaking of something that is an abomination).

So how much ground will Edgar need to gain this year in your opinion to get into the Hall before his time is up?

Chairman: He has to get at least to 40 percent, which sadly he won’t.  He is probably going to get back to 36%, which is where he debuted at seven years ago.

Sadly, he is probably going to have to wait for a Veteran’s Candidate ballot, but I really hope I am wrong.  Needless to say Edgar is the recipient of my pretend vote, but that and a cup of coffee gets him one whole cup of coffee.

Sphensicus: The good news for him is that being in Seattle, he is guaranteed to at least get a good cup of coffee. He also gets my vote and I am hopeful he gets to 36%, but I feel like I have given the writers too much credit all along. Pretty much everyone, other than Sosa, I have going up. I don’t want Edgar to be the second guy who goes down, but I fear it may happen. That DH bias is just too strong. So I’ll try keeping him at 27%, with hope that he actually goes up.
Last modified on Thursday, 22 March 2018 15:06
Tagged under
Tweet

Teams & Players feared those 2. They had every reason to bc they performed.

That's why they'll be in the Hall.

Even Dikembe Mutombo, Dennis Rodman, Dennis Eckersly, Ray Guy, etc. They were all specialist. They was all exceptional. And they're in the Hall because they were special.

Because Olerud didn't play til he was 40 but posted slightly lower numbers but has 3 gold gloves.

So if Olerud got no love from the voters, that's what Edgar Martinez will receive.
Quote
0 #1 David Xiong 2016-01-05 06:46
If you are going to use WAR to argue Hall of Fame credentials, you don't know nothing about baseball.

WAR is a busted stat.

Nor is AJ Pollock, Jason Heyward, nor Kevin Kiermaier top 15 players in all of baseball last year like their WAR suggests.

If you believe that I'm wrong....the n go ahead and admit to everybody that AJ Pollock's 6.6 season last year was as great as Rickey Henderson's record breaking 6.7, 1982 season.
Quote
Refresh comments list
RSS feed for comments to this post