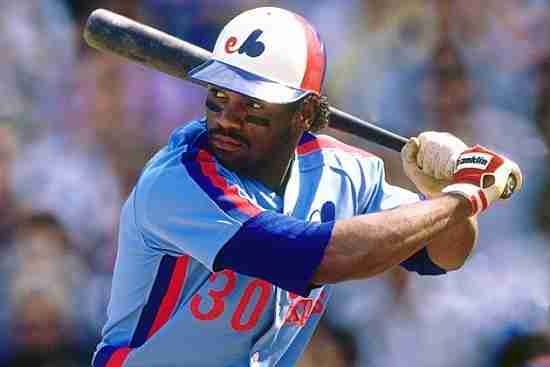 Who is going to be the first real victim of the move from fifteen years to ten?  The answer is Tim Raines, who is entering his ninth year on the ballot after coming off a near ten percent jump from 46.1% to 55.0%, but with only this year and next to draw from, matching that jump each year still puts him on the outside looking in.

I am a Jays fan, but more than old enough to remember the glory days of the 1980’s Montreal Expos with Gary Carter, Andre Dawson and Raines, the four time National League Stolen Base champion.  I loved his speed, his batting eye (.303/.413/.449 Slash Line) and an occasional Home Run or two.

He has the traditional stats, the advanced stats with a bWAR and JAWS of 69.1 and 55.6, both of which over the average HOF left fielder.

Is this an Expos thing?  Carter had moments with the Mets and Dawson won the MVP with the Cubs but Raines was only All-Star caliber in Montreal.

Spheniscus: The Expos? I vaguely remember them. Weren’t they that team that played in Puerto Rico for a while?

Seriously though, you bring up an interesting question. The Expos have had some incredible players. In fact, two of them went in this year with Randy Johnson and Pedro Martinez. Andre Dawson and Gary Carter are there as well, Carter even going in as an Expo. But what do the all of those guys have in common? There isn’t one you think of as an Expo first. Johnson? A Mariner (or maybe a Diamondback). Pedro? A Red Sox (Red Sock? I’m a fan of the team and even I can’t decide. Stupid trying to be cool pluralization). Dawson? A Cub. Carter? A Met. Vlad Guerrero will be up in a few years, but he’s an Angel. Another great Expo is on the list this year, Larry Walker, but he’s a Rocky (Rockie? Damn I should probably stop doing this). Heck, one of the numbers they retired is for Rusty Staub and he only played there for four years.

If Raines in his prime had gone to another franchise like, well, pretty much anyone else important who ever played for the Expos, he might be in already. He played the first 11 years of his career in Montreal. He then proceeded to bounce around the league, five seasons with the White Sox, three with the Yankees, stints in Oakland, Baltimore, Florida, and even back in Montreal. He just never really got the spotlight.

I mean, he won two World Series while with the Yankees. When you think back on those teams does a mental image of him even pop up? I remember Darryl Strawberry and Wade Boggs and Scott Brosius and David Cone and Chuck Knoblauch and Cecil Fielder and Dwight Gooden and even Charlie Hayes, all of whom made their biggest marks in baseball somewhere else. Raines never even springs to mind from those teams.

I also wonder if he suffers from Andre Tippett Syndrome. Tippett was the best player on my favorite team growing up, back when New England was an NFL backwater. He was a beast, a dominant force, and unfortunately someone who played the exact same position as his contemporary Lawrence Taylor who is widely considered to be the best player at his position ever. Raines has the same issue with Rickey Henderson, who is widely considered to be the greatest lead off guy of all time AND holds the stolen bases record. If you are comparing the two, Henderson is clearly the better player. The good news for Raines is that Tippett eventually was elected to the Pro Football Hall of Fame.

Chairman:  It’s true.  The sad thing is that Dawson and Carter actually had better runs as Expos but they needed those runs south of the border to make themselves a bigger name.  It’s also funny how you mention that Raines won a World Series, a fact that I forget an hour after I learn every time I do a piece on him.

Random note about that Puerto Rican team:  as a little kid I had an Expos hat and for the longest time I loved my “elb” hat.  Seriously, the only thing worse than that logo was Youupi.  Actually, Olympic Stadium might have been worse than those two put together.

I wonder if there was never a Rickey Henderson if he would be in and would have had that unofficial title of “Best Leadoff Hitter in Baseball”?  Although, if Rickey was in the National League, Raines might not have even made it past the first year!

Spheniscus: The fact that he is up over 55% is a good sign. He started down below 25%. The bad news is that he bounces around all over the place. He’s up, then down a little, then up a little more. Back and forth. Sure he gained almost 10% but that was after losing 6% the year before.

The really good news for Raines is I think that if he were to get knocked off the list next year without being elected, he has a REALLY good shot of being selected by a Senior Committee. He is a new school stats darling and was popular with his teammates and respected by his peers. He probably has the best chance of anyone on this list who is in danger of being knocked off. It just shouldn’t get to that.

And if he had 15 years he would definitely get in. Did we mention it was a stupid rule?

Chairman: And it is worth mentioning it again, how stupid it is!

He is one who has my fictional vote and prediction wise, I think he bounces in the right direction, but still shy of 60 points.

Spheniscus: He is actually #2 on my list and clearly gets my vote. I will actually give him the 60. I think it comes down to the new school guys taking over and convincing their fellow voters that this has to happen. If he gets to 60 I predict he gets in next year. If he doesn’t he’s a goner from the ballot next season and not in a good way.
Last modified on Thursday, 22 March 2018 15:07
Tagged under
Tweet