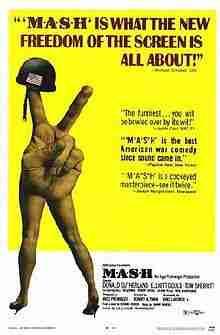 I’m attached to the television adaptation; attached to the characters in the tv show because they were the first I got to know. Having said that, it’s difficult for me to accept Donald Sutherland (great actor that he is) as Hawkeye Pierce (when I’m crazy about Alan Alda), let alone Robert Duvall as Frank Burns.

But these are the great actors who played the original characters of a screenplay written by Ring Lardner, Jr. in 1970, based on a book about a fictional U.S. Mobile Army Surgical Hospital (M*A*S*H) during the Korean War by Richard Hooker, published in 1968. Come to think of it, Robert Duvall’s portrayal of Frank Burns is much more believable when you think of just how outrageous the one is that Larry Linville played in the television series. It’s hard to believe the likes of Frank Burns could ever be a major in the army, let alone a surgeon. Coincidentally, the television version of Burns seemed to love the war as much as Duvall did in his role as Lt Colonel Kilgore, uttering that classic line in Apocalypse Now... “I love the smell of napalm in the morning.”

It was 1968 when Lardner, Jr., fresh off the Hollywood blacklist for the previous 15 years, fell upon the novel and identified with the anti-establishment themes. He brought it to Ingo Preminger, who then pitched it to 20th Century Fox. Lardner wrote the screenplay after Richard Zanuck, producer and studio executive, read the book and fell in love with it. But they went through several directors before settling on Robert Altman. Altman agreed to do it on the cheap because he too identified with the anti-establishment themes and wanted to use the film to make a statement. He took a lot of liberties with the screenplay, to the annoyance of Lardner, who nonetheless still won an Oscar for it.

Elliott Gould plays Trapper John McIntyre who wins the heart of Hawkeye by pulling a jar of olives from his parka to compliment the “welcome to the 4077th” martinis in the swamp, their home away from home. The film also introduces a slew of unknowns-at-the-time like Bud Cort, who many now know from the cult classic Harold and Maude. And Gary Burghoff, who played Radar O’Reilly, the only cast member from the original movie to also star in the television series. And René Auberjonois as Father Mulcahay, who, much later played Odo in Star Trek: Deep Space Nine.

Of all the outrageous scenes in the film, the most memorable would have to be the suicide scene and the Last Supper that preceded it. You see, Cpt. Koskiusko, after having failed to get it up for a woman convinces himself he must be a homosexual. Played by John Schuck (who also played Sgt Enright opposite Rock Hudson in the television cop-drama McMillan and Wife), Koskiusko announces to the entire camp that he has decided to end his life. This is when Suicide is Painless is heard for the first time, complete with lyrics, the song that became the opening theme without lyrics, for the television series.

Shocking with its humourous attack on the absurdity of war, Altman’s low-budget film was an unexpected success, bringing forth issues around morality and sexuality. And although M*A*S*H is set during the Korean war, the film drew more attention to the United States involvement in Vietnam, the real-life war going on at the time of the movie’s release. Altman planned it that way. “In addition to being innovative, Altman was intent on being outrageous, politically subversive, and irreverent.” ~ Backstory

M*A*S*H, the groundbreaking film that went on to earn over $80 million dollars at the box office, was also nominated for five Academy Awards. And in 1996, M*A*S*H was selected by the Library of Congress for preservation in the United States National Film Registry as "culturally, historically, or aesthetically significant".

+1 #1 Darryl Tahirali 2013-03-28 21:12
When Burns and Hot Lips are seducing each other for the first time, I don't know how Robert Duvall and Sally Kellerman kept straight faces, or how many takes they required: As they are pawing at each other in Hot Lips's tent, Burns says, "God meant us to find each other, Margaret." Then Hot Lips rips open the front of her dressing gown, exposing her chest to him, and cries, "His will be done!" I've seen that scene countless times, and I still burst out laughing just thinking about it now.

Lots of broad humor in M*A*S*H, but there are subtle asides as well. As the Burns-Hot Lips seduction is being surreptitiou sly broadcast all over camp, Hawkeye, who is performing surgery in one of the operating theaters, pauses briefly, then deadpans, "Sounds like Major Burns is performing a little dilation and curettage." It wasn't until I was an adult that I understood what he meant. And every woman I know shudders at the thought.