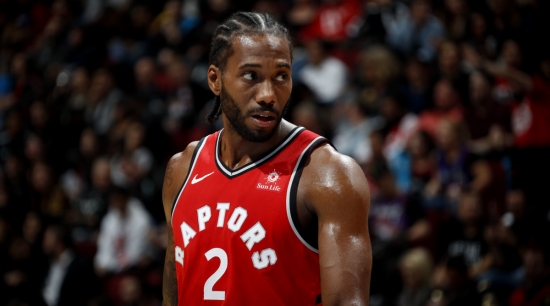 Including playoffs, only 84 Games.

That is all that Kawhi Leonard played for the Toronto Raptors, and if you want to place him at number one and build a 50-foot statue outside the Air Canada Center, we get it.   After all, the Raptors don't win the 2019 NBA Championship without him.

Raptors General Manager Masai Ujiri rolled the dice in what has to be considered one of the biggest gambles in sports transactions.  He traded his top player, DeMar DeRozan, an All-Star who wanted to stay in Toronto, for a bigger name, Leonard, but one who had become miserable and longed to play in his hometown of Los Angeles once his contract was up.  It was a short-term play to go for it, and it worked.

Leonard arrived as the top player he had already proved to be, and he meshed well with his new teammates.  His tenacious play on both ends set the team’s ethos, and he would be a Second Team All-Star, Second Team All-Defensive Player with a 26.6 PPG and a PER over 25.

Leonard was an absolute beast in the 2019 Playoffs.  Not only was the overwhelming choice as the Finals MVP, his heart-stopping buzzer-beater that bounced four times off the rim before falling through was the shot that put won them Game 7 against Philadelphia in the Eastern Conference Semi-Final.  The “Claw” did what was thought of as impossible, bring a title to a city where many NBA players did not want to go to.

As expected, Leonard left for L.A., joining the Clippers, but the Raptors fans were not upset.  Leonard never promised to stay, and he delivered what was once thought of as impossible.