The formation of the Brooklyn Nets began in 1967 as the New York Americans, a charter member of the American Basketball Association and it was an ugly beginning.  The team bounced around in different venues in the New York and New Jersey area and they did not find a lot of wins, but they toughed it out and survived the early years; something that not every team in the ABA was able to do.  After a few years of suffering and a name change to the Nets, they acquired Julius Erving from the Virginia Squires before the 1973-74 Season.  The Squires were hard-up and needed the cash back from that deal, but it was the just the tonic that the Nets needed to turn everything around.

“Dr. J” was named the ABA MVP in his first season in New York, and he would repeat that again in the next two seasons.  As you would imagine, this led to the Nets winning the ABA Championship in 1974 and 1976 and with Erving as their Center and best player, they were expected to have success when they merged with the NBA.

Or so they thought.

The NBA subjected them to an unexpected $4.8 million dollar penalty for invading the New York Knicks “territory”.  This decimated their payroll and they were no longer able to pay Erving what they promised him, leading to Erving refusing to report.  The domino effect resulted in Erving being traded to the Philadelphia 76ers for cash, and the Nets were awful for years.

The Nets moved officially to state of New Jersey for the 1977-78 campaign and they were now the New Jersey Nets and for the next twenty seasons they were average at best.  The acquisition of Jason Kidd made them a contender and they would make the NBA Finals for the first time in 2002, and appear again in 2003, but would lose on both occasions.  They would make the playoffs the next four seasons but would then falter.  In 2013, under new owner, Mikhail Prokhorov, they went all in trading for Kevin Garnett and Paul Pierce but they gave up too many picks and Garnett and Pierce were far too old to make a difference.

Prior to that trade, they moved back to New York, specifically Brooklyn and have been challenging the Knicks for ownership of the market.  After hitting rock bottom, they are a team on the rise as of this writing, especially with their new acquisitions of Kevin Durant, Kyrie Irving, and James Harden.

Note: Basketball lists are based on an amalgamation of tenure, traditional statistics, advanced statistics, playoff statistics, and post-season accolades. 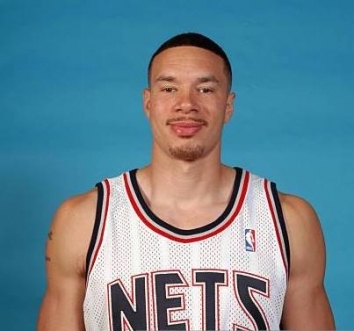 Top 50 Brooklyn Nets
Add new comment
Aaron Williams was undrafted out of Xavier and it took a long time for him to find his footing in the NBA.  In between stints with the Utah Jazz, Milwaukee Bucks, Denver Nuggets, Vancouver Grizzlies, Seattle SuperSonics, he played in the Continental League, the Italian League and the Croatian League.  He would have a decent season with the Washington Wizards and would sign with the New Jersey Nets for the 2000/01 campaign and would have…
Read more 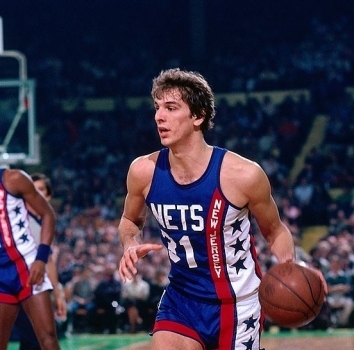 Top 50 Brooklyn Nets
Add new comment
Mike O’Koren studied basketball collegiately under Dean Smith at the University of North Carolina and the New Jersey Nets would draft him 6th overall in the 1980 Draft.  The Small Forward would average over 11 Points per Game in his first two seasons and would settle in as a reserve player over the next four years until he was traded to Washington.  He would play 392 Games for the Nets averaging 8.5 Points per Game.
Read more 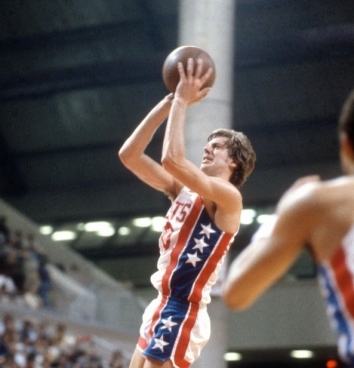 Top 50 Brooklyn Nets
Add new comment
A former SEC Player of the Year, Jan van Breda Kolff played a couple of seasons in the ABA before the team he was with (Kentucky) disbanded and he was selected by the New Jersey (then New York), who themselves were just arriving from the ABA.  His best season was his first with the Nets where he averaged 10.2 Points per Game.  The former Vanderbilt star would not start much but would play 434 Games…
Read more 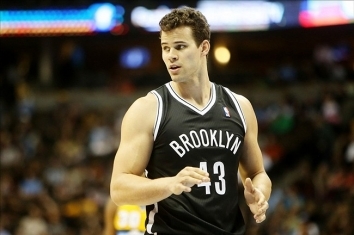 Top 50 Brooklyn Nets
Add new comment
The most productive time of Kris Humphries career took place when he was with the New Jersey/Brooklyn Nets.  The Power Forward was in the NBA for six seasons before he joined the Nets midway through the 2009/10 season and the next year, he had the chance to become a starter the year after.  In both the 2010/11 and 2011/12 seasons he averaged a double-double with a peak season in the latter of 13.8 Points and…
Read more 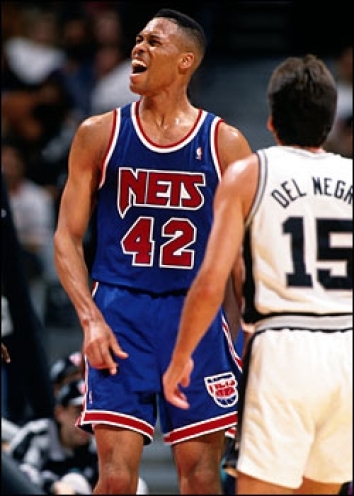 Top 50 Brooklyn Nets
Add new comment
A good defensive player over his professional career, it would begin for P.J. Brown with the New Jersey Nets where he played in his first three seasons in the NBA after electing to try the Greek League for a season.  The Center from Louisiana Tech likely made the right choice as the additional season probably helped him land a regular role with the Nets and he would be a decent defensive player.  Brown averaged 8.4…
Read more 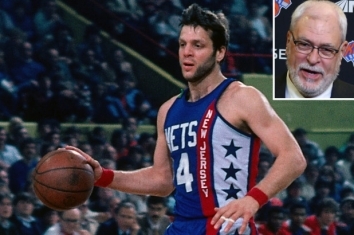 Top 50 Brooklyn Nets
Add new comment
Mike Newlin played for the Houston Rockets for eight seasons and he was traded to the New Jersey Nets where he gained more playing time.  Newlin played for New Jersey for two seasons where he had the highest Points per Game of his career with seasons of 20.9 and 21.4 respectively, but his rank is affected as his other numbers were down and he was more one-dimensional.
Read more 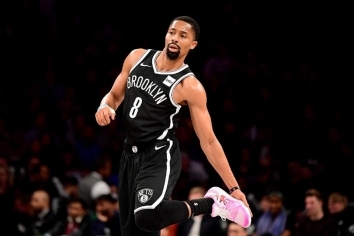 Top 50 Brooklyn Nets
Add new comment
Spencer Dinwiddie did not find a lot of success with the Detroit Pistons (the team that drafted him in 2014) but after they released him the Brooklyn Nets signed him where he has elevated his game in the two seasons he has played there.  Starting 58 of 80 Games in 2017/18, the Point Guard would average 12.8 Points per Game, but in more of a bench role in 2018-19 he actually increased his production to…
Read more 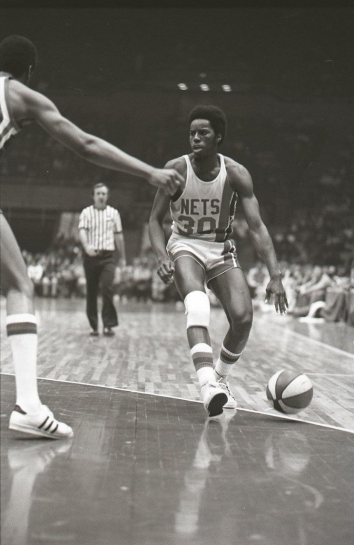 Top 50 Brooklyn Nets
Add new comment
Al Skinner was drafted by the Boston Celtics in 1974 but he never played there and was signed by the New York Nets, which allowed him to join his UMass teammate, Julius Erving.  Skinner saw limited action as a rookie but his minutes expanded in his second professional year (1975/76) and he had a 10.4 PPG season while assisting the Nets win the last ever ABA Championship.  Skinner stayed with the team when they migrated…
Read more 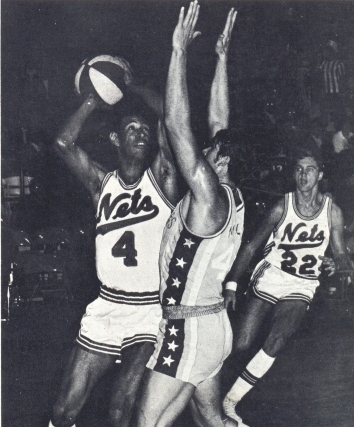 Top 50 Brooklyn Nets
Add new comment
An original New Jersey American (the first name of the franchise) Walter Simon was an All-Star in his (and the ABA’s) second year.  Simon played college at Benedict but was unable to get into the NBA as a pro so he bounced around semi-pro leagues until the formation of the ABA.  With New Jersey, he was able to finish 14th twice in Assists per Game and in his All-Star year he averaged 21.2 Points per…
Read more 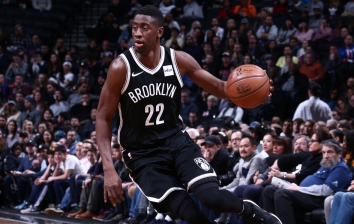 Top 50 Brooklyn Nets
Add new comment
Caris LeVert was the 20th Overall Pick in 2016 by the Indiana Pacers, but he never played for them (initially), as he was traded to the Nets two weeks after.  LeVert played in 57 Games as a rookie, averaging 21.7 Minutes and 8.2 Points per Game.  While LeVert started less games in his second season (10 from 26), his MPG went up to 26.3 and his PPG to 12.1.   LeVert would continue to miss games over the next…
Read more
Subscribe to this RSS feed