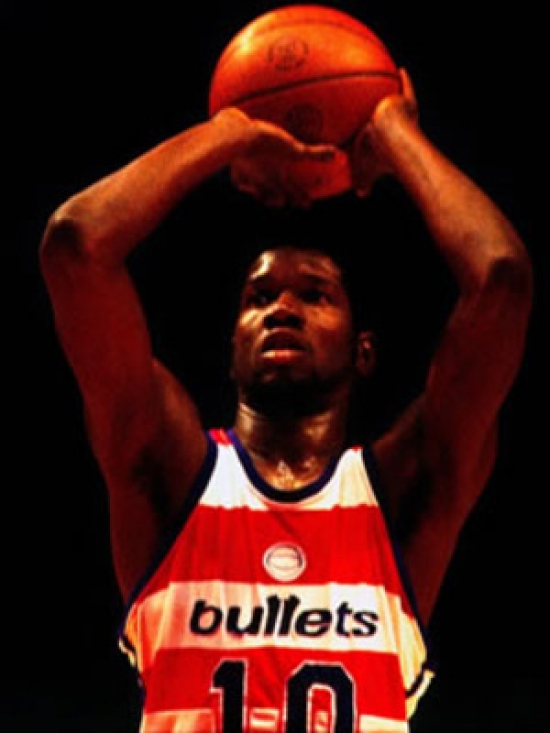 Bob Dandridge is one of the great unsung players in league history.  On two different occasions he was an important member of championship teams.  Coming from small Norfolk State did not help put Dandridge on the basketball map as he was only drafted in the fourth round of the 1969 draft but quickly showed he belonged.  In 1971 he teamed with Kareem Abdul-Jabbar and Oscar Robertson to lead the upstart Milwaukee Bucks to a championship over the Baltimore Bullets. Of course Jabbar and Robertson received most of the attention for this title but as both would tell you they would not have got there without Dandridge’s contributions.  Dandridge did the same thing later in his career. Traded to those same Bullets he had beaten, Dandridge became a key member of back to back final appearances in 78 and 79. In 78 the Bullets beat the Sonics and in 79 they lost a hard fought series.  Veterans and fellow front court mates Elvin Hayes and Wes Unseld received most of the accolades for the Bullets run.  In both series and during his whole career Dandridge was a silent assassin.  His dunk in game 7 of the first Seattle series sealed the victory for the Bullets.
A quick small forward who used his quickness to dominate slower players, Dandridge was not afraid to go to the hoop. Dandridge averaged 18.5 points per game during his career and stepped it up during the playoffs averaging 20 per game.  One of the best mid range games ever, Dandridge is one of those players who has never received the recognition he deserves.  Getting into the hall would be a way of correcting that.

Should Bob Dandridge be in the Hall of Fame?

Should Bob Dandridge be in the Hall of Fame?

+1 #3 Karl Crosby 2013-04-17 22:59
Bob Dandridge should have been in the Hall of Fame a long time ago. He was just like Jamal Wilkes as a small forward. And look how long it took to get Wilkes in the Hall. Both men had great NBA career making things easy for the centers of their clubs. It is just so dirty the way the NBA Hall of Fame committee treat the small forwards as far as not giving them their due credit.
Quote
+1 #2 Don Hairston 2013-03-21 21:00
BOB WAS HIGH SCHOOL MATE,WE BOTH GRADUATED FROM MAGGIE WALKER HIGH-65, HE ALWAYS HAD SWEET JUMP,BUT AS VERY NICE PERS..NEVER HAD BAD ATTITUDE,MET HIM YEARS LATER,WHEN BUCKS WERE PLAYING, HE EVEN INTRODUCED ME TO KAREEM-WHO WAS NOT VERY FRIENDLY,,IN AGE WHERE STARS OFTEN DISAPPOINT.. BOBBBY WAS A CLASS ACT, VERY TALENTED, WARM, CARING PERSON,,FUNN Y THING IN THE DAYS OF 1965,WHEN THERE WERE BLACK AND WHITE SCHOOLS,,HE DID GET THE RIGHT KIND OF RECOGNITION, WHICH IS WHY HE WENT TO NORFOLK STATE,BUT DID THEY HAVE A HIGH SCORING TEAM,,,,BOB D WILL ALWAYS BE A HALL OF FRAMER TO THOSE WHO KNOW HIM,,GREAT GUY
Quote
+1 #1 Mick 2013-01-11 13:46
Bobby D has long been overlooked. How can the Hall justify Bill Bradley and Jamaal Wilkes in and not Bobby? Sampson's election is a real joke!
Quote
Refresh comments list
RSS feed for comments to this post