Baseball
Comments (16)
Statistically, there is no argument about the Hall of Fame qualifications of Pete Rose.  Even the most casual baseball fan is aware that “Charlie Hustle” is the all time hit king with 4,256 hits; a record that may never be broken.  Rose also was a seventeen time All Star, and proved to be a clutch performer as evidenced by his three World Series Rings; including a World Series MVP.  Sadly, as much as casual sports fans are aware of Rose’s on field accomplishments, many who have never turned their dial to ESPN knows his off field embarrassments.
Read more

Baseball
Comments (16)
Did he or didn’t he conspire to fix to the 1919 World Series?  Over eighty years after the fact, there is still a sizable debate as to whether “Shoeless” Joe Jackson was involved in the “Black Sox” scandal that saw the Chicago White Sox throw the World Series for financial gain against the Cincinnati Reds.
Read more

Baseball
Comments (17)
Couldn’t we just say look at the previous Barry Bonds entry and say “Ditto”? Seriously, the parallels are too great to ignore. Like Bonds, Clemens may have had a Hall of Fame career before he allegedly took PEDs, and like Bonds, he dominated the steroid era as he did the decade before. He has the career statistics (353 wins and 4,672 strikeouts), the dominating seasons (seven Cy Youngs and an MVP) and two World Series Rings. “Rocket” Roger Clemens is arguably the best Pitcher in the past twenty five years.
Read more

Baseball
Comments (7)
You may have noticed many sportswriters who have a Hall of Fame ballot for the Baseball drink a little more these days. The PED question is now completely unavoidable with the new wave of eligible candidates as the sport’s biggest stars of the last two decades are now eligible for Hall of Fame enshrinement. It is not that our baseball list has not been controversial in the past. We have already put it through serious revisions when we created a “1a” and a “1b” to accommodate the fact that both Pete Rose and “Shoeless” Joe Jackson are both ineligible for…
Read more

Baseball
Comments (3)
Playing with Alan Trammell for virtually his entire career, Lou Whitaker was one half of the longest running double play combination in Baseball history.  Like Trammell, Whitaker was a great player with both bat and glove and a big part of Detroit’s World Series win in 1984.
Read more

Baseball
Comments (4)
If you think that all of the Turn of the Century Baseball Players that should be in the Hall of Fame is already in, then we ask you to think again.  We offer you the case of “Bad” Bill Dahlen, whose Hall of Fame campaign is being championed by sabremetricians and traditionalists alike.
Read more

Baseball
Comments (11)
For the record, we love outspoken athletes. They may not always be popular with fans (and other players), but they sure make for far better sound bites than “we gotta go out there and give 100 percent” or other such statements from the “Athlete’s guide to dealing with the Media”. Ironically, Schilling is now part of the media, but remains as outspoken as ever.
Read more

Baseball
Comments (3)
With all due respect to Ivan Rodriguez and Vladimir Guerrero, statistically speaking, Manny Ramirez is the top dog of the new possibilities for the 2017 Class. We will also say, he was the most entertaining. We are all aware of the eccentric “Manny being Manny moments, but ahead of all that was a man who was an incredible hitter who had a career slash line of .312/.411/.585/.996 that included one Batting Title, three On Base Percentage Titles, three Slugging Titles and three OPS Titles. Most importantly of all, Ramirez maintained his offensive production in the Post Season and was the…
Read more 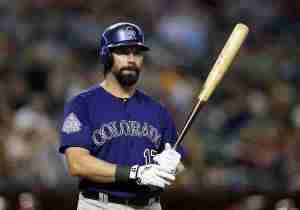 Baseball
Add new comment
Larry Walker struggled to get into the Hall of Fame, and it took him ten years to make it.  His fellow Colorado Rockie, Todd Helton should have an easier path. The five-time All-Star was a multi-time Silver Slugger winner and Gold Glove recipient and from the period of 1999 to 2004 was one of the best offensive players in the game scoring an OPS over 1.0 five straight years as well as eclipsing the .300, 30 Home Run and 100 RBI mark.
Read more

Baseball
Comments (100)
A large contingent of Dodger fans will maintain that Cooperstown’s greatest omission is that of Gil Hodges.  Considering he was one of the most consistent and best Home Run hitters of the 1950’s, these fans have a strong case.
Read more

Buy your Tickets to see Exhibition: Nationals Homecoming Game at Nationals Park in Washington, DC HERE for as little as $20!

Buy your Tickets to see New York Yankees at Baltimore Orioles - Opening Day at Oriole Park at Camden Yards in Baltimore, MD HERE for as little as $95!

Buy your Tickets to see New York Yankees at Baltimore Orioles at Oriole Park at Camden Yards in Baltimore, MD HERE for as little as $33!

Buy your Tickets to see New York Yankees at Baltimore Orioles at Oriole Park at Camden Yards in Baltimore, MD HERE for as little as $43!

Baseball
Comments (7)
We imagine that there are younger baseball fans that are oblivious that there really was a Tommy John and that it was not just the name of a surgery.  This would be unfortunate, as Tommy John has to go down as one of the most durable pitchers in baseball history.
Read more

Baseball
Comments (1)
The 1997 National League Rookie of the Year, Scott Rolen, is in our eyes the most intriguing candidate of those eligible in 2018. Rolen was a very good hitter, who topped the 2,000 Hit and 300 Home Run mark in his career, played in seven All Star Games and at first look would appear an outside looking in candidate for the Baseball Hall of Fame. He was considered a top Third Baseman for much of his career, both in terms of offense and defense, however there was only one season where he as a serious contender for the Most Valuable…
Read more

Baseball
Comments (2)
Minnie Minoso may be known for being the first (and our guess the last) baseball player to play in five different decades.  It may seem impressive, but it was a marketing gimmick which had Minoso play a couple of games in 1976 and 1980 to achieve this honor.  Minoso was a popular player and capable athlete who had the ability to perform the task.  We would rather think of the 1951 to 1960 version of Minnie Minoso who may have been the most underrated player in the league and whose play was anything but gimmicky.
Read more

Baseball
Comments (2)
Outside of Boston, it may be forgotten how good Dwight Evans was.  It could be because he played on teams with the more popular players, but Evans was a huge component in both the 1975 and 1986 World Series runs.
Read more

Baseball
Comments (17)
It is possible that this candidate is shrouded with more controversy than our 1A and 1B candidates combined?
Read more

Baseball
Comments (2)
Gary Sheffield has to be the most interesting candidate who appeared on the 2014 Ballot. Traditionally speaking, Sheffield hit the magical 500 Home Run mark, won a Batting Title and had five seasons with an OPS over one. His career WAR is respectable, his OPS is in the top fifty and he also won five Silver Sluggers and played in nine All Star Games. That’s pretty good right? Unfortunately there are few things to consider.
Read more

Baseball
Comments (12)
This one is a little tough.  We recognize (and we are sure most people agree) that the overall career numbers of Roger Maris does not equate to a Hall of Fame Baseball player.  However, many very good players have been excluded from Cooperstown because they lacked moments of greatness.  Nobody could ever doubt that Roger Maris had a year that was part of baseball immortality.
Read more

Baseball
Comments (5)
Athletes are competitive by nature, but 99.9 percent of them paled to the competitive juices of Wes Ferrell.  He was known to get violent whenever he lost and take it out on himself and inanimate objects.  He may have been animated himself at times, but his teammates have always said they wanted him on their side.
Read more

Baseball
Comments (4)
They called Dave Parker the “Cobra” and the nickname fit.  He could strike with his bat, his legs and his throwing arm and during the last half of the 1970’s he could arguably make a claim as the best player in the league; in fact he did make that claim.
Read more
Subscribe to this RSS feed

Warning: count(): Parameter must be an array or an object that implements Countable in /home/notinhal/public_html/templates/cosmos/html/com_k2/baseball/category.php on line 270