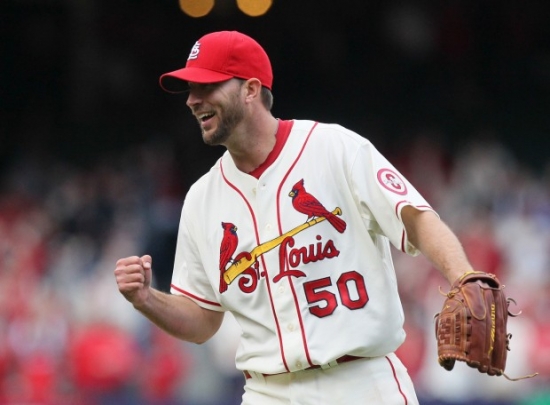 As of this writing Adam Wainwright has been with the St. Louis Cardinals his entire professional career after arriving from the Atlanta Braves system via a trade.  We bet they wish they could get that one back!

Wainwright would be a September 2005 call up and would make the 2006 roster in a relief capacity and was asked late in the season to become the closer due to an injury to the incumbent Jason Isringhausen and he would close games that year in both the NLCS and World Series win.  He would record four Saves, earned a Win and allowed no runs in nine appearances that post season.

After that, Wainwright returned to the starting role, which was what he did all through out the minors.  He would become a consistent performer and in 2009 he would lead the National League in Wins (19) and was third in Cy Young voting.  2010 would see him go to his first All Star Game (he would have three in total) have his first 20 Win Season and would finish second behind Roy Halladay for the Cy Young.  Like so many hurlers, Tommy John surgery took him out for an entire season (2011) though he would be awarded with his second World Series Ring as the Redbirds took it all that year.

He would return in 2012 and in the two seasons that followed he would again lead the NL in Wins with 19 only to have one win more the season after and not lead that metric.  He was also and second and third in Cy Young voting respectively those two years.  To date he has 162 Wins and 1,776 Strikeouts.

His ranking here is also aided by the fact that he has been a good fielder (two Gold Gloves) and a decent batter who homered on his first pitch in the Majors and was a Silver Slugger recipient in 2017.