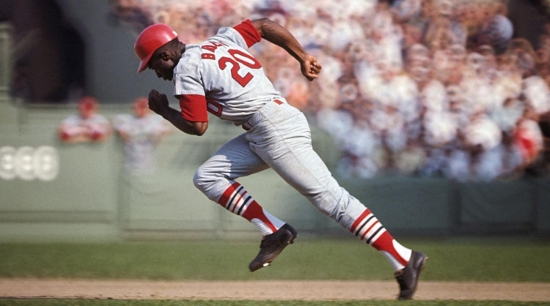 Lou Brock arrived to St. Louis in a mid-season trade in 1964 and it turned into one of the greatest steals in trade history.  Brock’s batting seemed to automatically improve and he would help the Cardinals win the 1964 World Series.  With Brock’s increased base presence he also developed stronger baserunning skills and in 1967 he went to his first All Star Game, won his first Stolen Base title and helped the Cards win the World Series.  Brock would be a base stealing machine leading the NL in that metric eight of nine seasons (1966 to 1974), the last of which would set a then record 118, which was the season where he finished second in NL MVP voting.  The Outfielder would become the all-time Stolen Base leader with 938 (888 with St. Louis) and he would hold that record until Rickey Henderson broke that mark.

While Brock was known primarily for his prowess on the base paths he was quite the hitter with St. Louis who had four 200 Hit seasons and another seven where he tallied over 180.  In his final season with St. Louis, he would enter the 3,000 Hit Club while accumulating 2,713 with a .294 Batting Average overall for the Cardinals.  It also can’t be discounted that over his three World Series appearances he had a Slash Line of .391/.424/.655 with 4 Home Runs over 21 Games.

If this ranking seems a little bit on the low side keep in mind that defensively, Brock was not that special, in fact he had eight seasons where he had a -1.0 Defensive bWAR, is third time all-time in Errors by a Leftfielder, and he was in the top five six times with St. Louis in Strikeouts.  This certainly hurt his advanced metrics, which is reflected here.

He would be inducted into the Baseball Hall of Fame in 1985 on the first ballot.