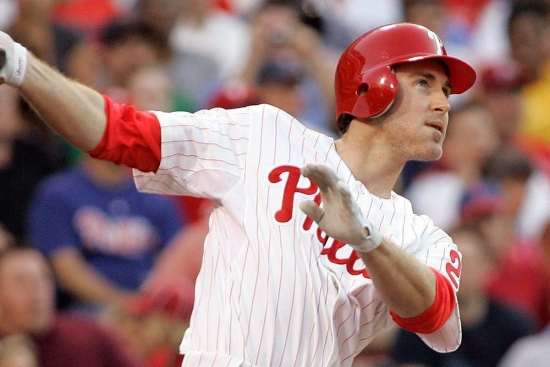 Chase Utley came up through the Philadelphia Phillies system, and after debuting in 2003, he would quickly become the heart of a team that would win the 2008 World Series.

The Second Baseman brought a lot to the table, and from 2006 to 2010, he was a perennial All-Star.  In three of those seasons, Utley finished in the top ten in MVP voting, and he was a Silver Slugger in four of them.  From 2005 to 2009, he would have at least 22 Home Runs, with the first four of them seeing him hit the three-digit mark in Runs Batted In.  He also had two .300 years in that time frame.  Utley did not steal the most bases, but when he did, he was rarely caught.  As of this writing, he is second all-time in Stolen Base Percentage.  He also sacrificed his body to get on base.  He led the NL in Hit By Pitch three years in a row (2007-09), and he is in the top ten all-time.

Defensively, Utley never won a Gold Glove, but he certainly should have been considered for one.  He had five seasons where he had a Defensive bWAR over 2.0.

Utley would go to one final All-Star in 2014, and he would finish his career with a few seasons in Los Angeles with the Dodgers, where he was there to provide veteran leadership.  He retired in 2019 with 1,885 Hits with 259 Home Runs.

Should Chase Utley be in the Hall of Fame?