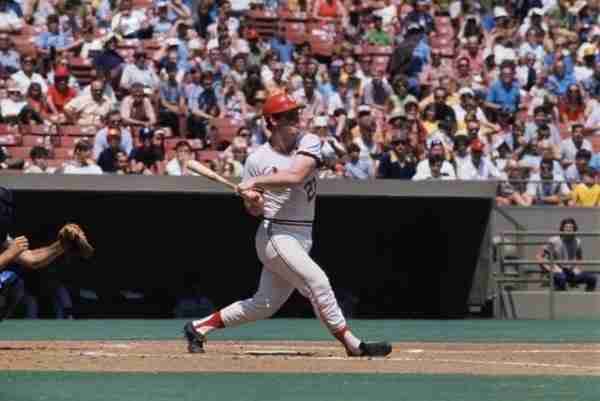 With all due respect to Johnny Bench, Gary Carter or other Hall of Fame catchers, if they were to be judged solely on their offensive accomplishment and were outfielders there is a good chance that half of them would not be in the Hall.  This is not to knock catchers, but they have not been traditionally your power position in the lineup.  Ted Simmons was a catcher in the era with Bench, Carter and Fisk he was clearly in their shadow despite having numbers that matched their production.

Ted Simmons hit .300 seven times and finished off with a career average of .285, and showed off clutch batting with 1,389 career Runs Batted In.  He was a definite asset in the lineup, and showed more than capable power over a long period of time.  Statistically, he is on par with the aforementioned Hall of Fame catchers and it could easily be argued that he was more effective with the bat than all of them.

So why didn’t he get even a look from the Hall?  Simmons did not win a World Series and wasn’t a flashy media seeking player.  He also did play in the catcher slot for a long time, but he was not a great defensive asset and base runners were not threatened by his arm.  With that said, shouldn’t Ted Simmons at least have had more than one year on the ballot?

Should Ted Simmons be in the Hall of Fame?

Should Ted Simmons be in the Hall of Fame?

His playoff numbers were terrible which gives voters one thing to mention as to why he should not be in. Just sayin'. Oh and as for whether or not I think he should be in the HOF it seems he should be. I just wish he would have shined in the postseason to make it even easier to say he should be there.

So Carlton Fisk is in for his post season numbers?

So post season is why you got into the HoF?

So player B had more hits and RBI's while playing in pitchers parks and also had more HR's and RBI's in post season. Player A is in the Hall and Player B isn't.

There is no legitimate reason why the leader in hits and 2nd in RBI's is not in the HoF.
Quote
0 #7 Sean DeMarco SeanAKADeViLzzz 2016-10-08 10:20
His playoff numbers were terrible which gives voters one thing to mention as to why he should not be in. Just sayin'. Oh and as for whether or not I think he should be in the HOF it seems he should be. I just wish he would have shined in the postseason to make it even easier to say he should be there.
Quote
0 #6 Brad 2015-06-25 23:14
I feel that Ted Simmons was never elected into the Baseball Hall of Fame because the Cardinals weren't great teams back in those days even though he was a great player for the Cardinals I think it hurt him not getting the votes he needed to get into the Hall of Fame.
Quote
+3 #5 John Smith 2015-04-30 01:23
Simmons has more career hits than any Hall of Fame catcher.
Quote
+3 #4 jdavis 2015-01-03 06:00
When Simmons retired he had better offensive numbers than all catchers in the hof except Yogi Berra. His defensive stats are also very comparable to most hof catchers. It is an inexplicable shame that he is not in the hof. If he played on the east coast I am sure he would be in. Just shameful.
Quote
+3 #3 Darryl Tahirali 2013-10-23 00:10
Robert, Simmons's post-playing career accomplishme nts should have no bearing on his being evaluated for the Hall of Fame as a player.

Edited 2016: Should Simmons come up in an Expansion Era Committee vote, his post-player activities in baseball should be considered, just as Joe Torre was a bubble candidate as a player but it was his career as a manager that helped him into the Hall.

However, Simmons does not that as high-profile or distinguishe d post-player career as does Torre. He is so on-the-bubbl e as a player that I go either way. He is ranked 10th in JAWS on baseball-ref erence.com, ahead of a few Hall of Famers already. I might not still vote for him but I wouldn't object if he does go in.
Quote
0 #2 Robert 2012-05-28 18:38
This profile doesn't even recognise the work he has done after he stopped playing. He even at one point was the General Manager of the Pittsburgh Pirates.
Quote
+2 #1 Robert 2012-05-28 18:36
Ted Simmons should absolutely be in the Hall of Fame.
Quote
Refresh comments list
RSS feed for comments to this post