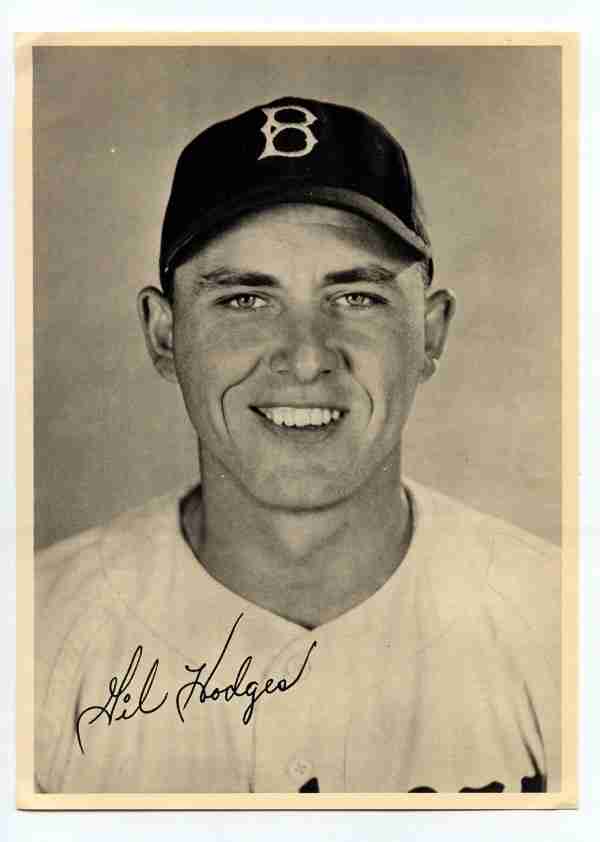 A large contingent of Dodger fans will maintain that Cooperstown’s greatest omission is that of Gil Hodges.  Considering he was one of the most consistent and best Home Run hitters of the 1950s, these fans have a strong case.

A lot of players get called a model of consistency but Gil Hodges really fit that bill.  For eleven years in a row, he smacked twenty homers and delivered a three-digit number in Runs Batted In total for seven straight seasons.  He didn’t hit for a high average, but he did walk consistently enough to make up for it.  He was an athletic man and was a huge asset in the field with his fast hands and quick thinking.  Basically, he was the prototype for athletic first basemen that had good power and could bat clean up.

The knock against Hodges is that as proficient as he was for hitting the long ball, he never led the league in that category.  In fact, other than Games Played, Gil Hodges never led the league in any offensive category and though he always received a few MVP votes he was not a serious thought for any of them.  Eventhough, Hodges put up good power numbers, many have since surpassed but when he retired, everyone who was eligible and had more home runs had been inducted.  Hodges is currently the man who has received the most votes but has yet to be enshrined, and sadly that is the lone record that he does have.  Even sadder, that record seems fairly safe.

Should Gil Hodges be in the Hall of Fame?

Should Gil Hodges be in the Hall of Fame?

Now tell me, considering that we have just seen only a few points on how they compare, and we all agree that Snider is a bona fide Hall of Famer, wouldn’t you say that Hodges is too?

Now tell me, considering that we have just seen only a few points on how they compare, and we all agree that Snider is a bona fide Hall of Famer, wouldn’t you say that Hodges is too?

Stan Musial said, "Gil Hodges was the greatest first baseman of his generation." Al Lopez said, "For my money Gil Hodges was the best first baseman there ever was." And, Vin Scully, who has seen them all over his 60 years behind the microphone said, "I can't understand why Gil Hodges isn't in the Hall of Fame." Willie Mays said, "Gil Hodge is a Hall of Famer. He belongs in Cooperstown. " Joe Morgan said, "Gil Hodges should have been in the Hall of Fame a long time ago."
Quote
+1 #98 GW Smith 2014-09-27 22:03
(Continued)
Snider hated to hit of lefties, but because of the Dodgers heavy right handed lineup he saw almost all righties, so, 92% of his HRs were of righties. What luck! Hodges had a hard time with right-hander 's outside curveballs, but still hit 80% of his HRs against righties. Compared to left, Ebbits Field was 52 feet shorter in right than in left, with a big fence that turned fly balls into singles and doubles. Snider said, "All you had to do was get the ball up in the air and it had a good chance of going out." Nice! Snider said, "If Gil would just swing at those outside curves instead of taking them for strikes, he'd hit 300 every year."

3 times Hodges and Snider had 30/100 seasons in the same year; Hodges bested Snider 2 times (1953, 54), and Snider bested Hodges one time (1953). All 5 of Hodges' seasons were consecutive. Snider had 4 consecutive years. Hodges was nominated for MVP in 9 years (7 consecutive) , Snider in 8 years (6 consecutive).
Head to head by season, Hodges out homered Snider 9 to 6, and they tied once. For RBI's, Hodges led Snider in 8 years to Snider's 6 years, and they tied once. At the end of 1962 they both had 1271 RBIs. This was essentially Hodges' last year except for 11 games in 1963. At the end of 1962 Hodges was the all-time leader in HR for NL right handed hitters and in 10th place all-time for the Major Leagues.
Quote
-1 #96 R Witt 2014-09-27 06:16
After reading all these comments, I can't help but root against Hodges ever getting into the Hall, so GW can continue posting half-baked justificatio ns for putting him in!